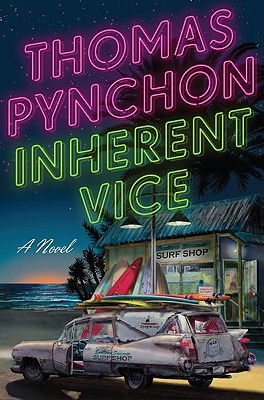 For the last few weeks now, St. Flip of Lawndale, for whom Jesus Christ was not only personal saviour but surfing consultant as well, who rode an old-school redwood plant running just under ten feet with an inlaid mother-of-pearl cross on top and two plastic skegs of a violent pink colour on the bottom, had been hitching rides from a friend with a little fibreglass runabout far out into the Outside, to surf what he swore was the gnarliest break in the world, with waves bigger than Waimea, bigger than Maverick’s up the coast at Half Moon Bay or Todos Santos in Baja. Stewardii on transpacific flights making their final approaches to LAX reported seeing him below, surfing where no surf should’ve been, a figure in white baggy trunks, whiter than the prevailing light could really account for… In the evenings with the sunset behind him, he would ascend again to the secular groove of honky-tonk Gordita Beach and grab a beer and silently hang out and smile at people when he had to, and wait for first light to return.

Back in his beach pad there was a velvet painting of Jesus riding goofyfoot on a rough-hewn board with outriggers, meant to suggest a crucifix, through surf seldom observed on the Sea of Galilee, though this hardly presented a challenge to Flip’s faith. What was “walking on water,” if it wasn’t Bible talk for surfing? In Australia once, a local surfer, holding the biggest can of beer Flip had ever seen, had even sold him a fragment of the True Board.

As usual among the early customers at Wavos, there were differing opinions about what, if anything, the Saint had been surfing. Some argued for freak geography – an uncharted sea-mount or outer reef – others for a weird once-in-a-lifetime weather event, or maybe, like, a volcano, or a tidal wave, someplace far away out in the North Pacific, whose swells by the time they reached the Saint would have grown suitably gnarlacious.