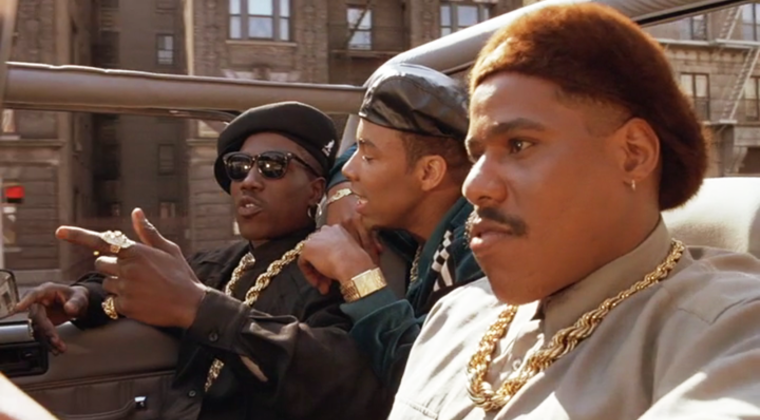 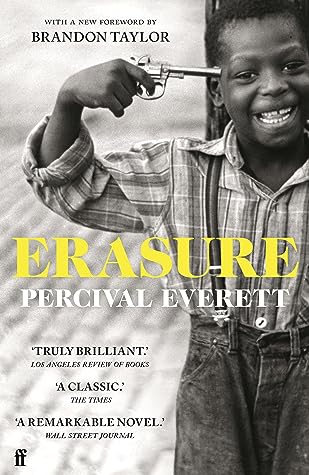 “Where you think you goin’,” Lois bark at her.

Penelope laugh it off just as cool as shit. “I’m going to have young Mister—.” She stop and look at me. “What’s your name?”

“That’s right,” she say. “I’m going to have Van here drive me down the hill for a little shopping.”

Lois give me the evil eye and say, “You mind now.”

And I’m thinkin, shit, I ain’t no dog. I gives her the evil eye back and gets into the car. Penelope surprise me and be gettin in the front seat wif me. Shit if I ain’t sweatin now.

“Take me to Rose’s,” she say. “That’s in Santa Monica. Just drive. I’ll tell you when to turn and which way.” She say that last part real slow and it make me nervous, wondering what she be meanin, cause I know she be signifyin.

We gets to this fancy ass restrant and it just covered wif people. Blond bitches with shades and white dudes with they shirts open showin stomack muscles. But Penelope dont wanna go in, she just wanna pick up this candyass nigger who be waitin outside. She get out the car and hug the guy then they gets in the backseat.

“Let’s go to your neighborhood,” she say.

I just look at her in the mirror. Then I looks at the dude in the silk shirt and the shades hangin round his neck.

“We want to see where you live,” she say.

“Van, this is Roger. Roger, this is Van. He’s working for my father.”

“Cool, brother,” Roger say. “Take us to the hood and we can shoot some hoops and then maybe score some weed and eat some chicken.” They laughs.

“This is my car, Van,” she say. “Now, let’s roll.” Penelope lean back into the seat and look at my eyes in the mirror. “You like my daddy?” she ask.

“You know he puts a lot of money into the ‘hood,” she say.

“He makes loans and gives some cheap legal help,” she say.

Roger laugh out loud, then say, “You mean he’s a loan shark and an ambulance chaser.”

They giggles together and Penelope say, “You watch what you say now. Van might run home and tell daddy.”

I be filled up with heat now. They be laughin at me? The muthafuckas laughin at me? Shit, I wanted to stop the car and kick they asses. That Roger muthafucka, think he all cool and shit and that he look good. He ain’t shit. He ain’t nuffin but a sorry-ass muthafucka and I oughta slit his sorry-ass throat.

“You live around here, Van?” Roger asked. “What is this? Compton?”

I don’t say nothin. I just glance at them in the mirror. They starin out the windows like we in Jungleland or some shit. Like we at Dissyland in that fuckin submarine. Niggers on the street be lookin at me drivin this fine car and I feels cool till I remember that I’m in the front by myself and them two bitches be in the back and I be lookin like some flunky-ass chaffeur.

Penelope lean forward and put her hand on my shoulder. “Take us someplace colorful to eat,” she say.

The feelin of her hand on my shoulder makes me less mad. “What you wanna eat?” I ax.

“It’s okay if you didn’t. No jobs out there anyway.” Roger look back out the window. “I didn’t expect the houses to have yards here.”

“They’re people just like you and me,” Penelope say.

“You ought to think about going back to school,” Penelope say, lookin at my eyes in the mirror. “I bet daddy could help you get a scholarship to college.”

“What kinda schola-ship I’m gone get?” I ax.

“I don’t know. You’re underprivileged, you’ve that going for you.”

Roger laugh. “Can you run fast?” he ax. “If you can run fast then you can run track. Can you play basketball?”

“There you are then. A basketball scholarship.” Roger got this smartass look on his face. I stared at him in the mirror, but he don’t look at me.

I starts worryin and hopin that Yellow and Tito don’t see me. I decide to take them to this rib joint a couple blocks away. I know Tito and Yellow won’t be in there, cause Tito got throwed out for feelin the waitress. But once we parked in front, I don’t wanna go in. I don’t want nobody I know seein me out with these fuckas.

Penelope and Roger gets out, but I stay behind the wheel.

“Somebody better watch the car,” I says.

I be trapped. I be feelin like a little animal they found on the road some damn place. I’m pissed as hell now, but they gots money and I realize how important that be. Mr. Dalton got all the money in the world. And I ain’t got shit. I don’t wanna go in, but I do. I’m wonderin why they so interested in me and be actin so nice to me like this. The sun be bright and I feels like I be caught up in a web of light. I follow them into the place called Ernie’s Kitchen.

This one dude I know wave at me from cross the room, but he be starin at Penelope and Roger. Then I see Cleona starin at me from the far wall. She still mad, but she interested. She wave.

“You know her?” Penelope say as we sit at a table.

“Of course he knows her,” Roger say. “He probably knows everybody in here. Right, Van?”

I don’t say nothing.

“Invite her over,” Penelope say.

The waitress bring us some chicken and beer and we start eatin.

They keeps eatin, but I can’t.

“Yeah,” I say and I watches him fill my glass.

“What’s your father do?” Penelope ax me.

“What about your mother?” Roger ax. “Is she alive?”

Penelope and Roger look at each other and then they laughs loud.

Eveybody in the place looks over at us. “You’re a riot,” Penelope say to me. “A slave,” she repeat. “That’s rich.”

Penelope look at Roger and he look at her and they bust up laughin.

“You’re kidding me,” Penelope say. “Four babies? Are you married?”

“You’re not married and some woman has had four babies by you?” Roger ax.

They look at each other and Roger make like he whistlin but don’t no sound come out. Then they be starin at me.

“What the fuck you lookin at,” I say.

“Oh, nothing,” Penelope say. “Four babies. Do you see them?”

“I sees my babies,” I say and I starts to eat some of that chicken. I be rippin into a thigh like it the last food on earf. Grease be all on my mouth and shit. I drink some beer and I see they ready to go. I wipes my mouth on my sleeve.

“That was good, Van,” Penelope say. “Thanks for bringing us here.”

They sits in the back seat and I be drivin them around like some kinda natral-born fool. I takes them out of my hood anyways and they don’t even notice cause they in the backseat drinkin booze out a flask. Roger offer me some but I say no and he takes a big swig and laugh at me.

I wanna pull over and drag his skinny ass out the car and kick the shit outta him. But I don’t do it and I realize they money scare me and then I feels sick.

They makes me drive them over to downtown and Roger say he know a corner where he can score some weed and Penelope say, “Oh goody.” And I just drives the car. There we is on Union and I’m leanin against the car watchin Richie Rich and Veronica buy they little bag when I see a jeep comin up. Damn, if it ain’t Jeep Man and he got one of his partners with him. He parks behind me and they hops out and I’m thinkin oh shit and here they comes.

“Fuck you,” I say and since I know why he stop, I just drives on his face with my fist. Bam! Blood fly out his eye like a bug and the punch feel real good to me. Real good. So good I don’t hardly feel it when Jeep Man’s partner hit me in the chest. I comes up with my knee in his fuckin balls and he double over. But I don’t want him. I want Jeep Man and so I drives on his face again and I feel it soften under my knuckles, like bread or sumpin. Bam! I gots blood on my fist and he gone. He ain’t gone be trouble to nobody for awhile. I hears a scream and I turn to see Penelope standin there. She turn and Roger catch her in his arms.

We gets into the car and I tear off. My fist is bloody and my heart be beating fast and I feel good. I feel real good. “So, you get some smoke?” I ax.

“Well, light it up, nigger,” I say. I look at Roger in the mirror and I see in his face that he ain’t never been called nigger before. “I don’t mean nothin by it. I’m a nigger, too.”

He rolls a joint while Penelope kill off the flask. She drunk as shit. We smoke and I drives.

“Whatchew mean, not really?” I ax.

“I’ve got a black belt in Kung Fu, but I’ve never actually been in a fight.”

I hold up my fist and show him the dried blood on my knuckles. “That there be my black belt.”

Penelope lets out a high and drunk giggle.