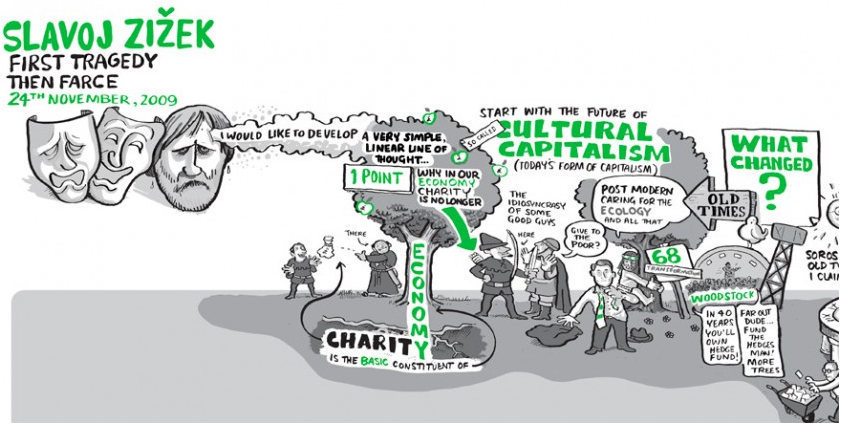 The RSA Animate series is one of the best series of introductions to modern thought leaders, be it in philosophy, economics, sociology, psychology and other fields. 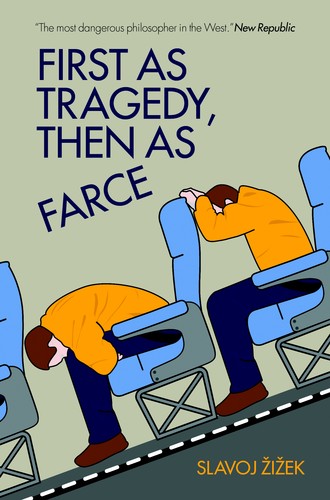 In 2009 Slavoj Zizek published First As Tragedy, Then As Farce, the title refers to a phrase attached to communism in the 20th century, and is used reflexively to apply to the current state of capitalism.

Specifically he outlines his criticism of Cultural Capitalism in the book, as epitomised by Starbucks and the Toms Shoe Company.

The primary idea is that our charitable behaviour and impulses have been coopted as part of a kind of ‘capitalist guilt offsetting’ (my phrase). The implication is this model means you don’t actually have to change your behaviour, such as buying a coffee from Starbucks, you are simply sold a version of ‘being good and ethical’ along with your coffee.

He posits the main outcomes of this is that you feel better about your “semi-ethical” consumerist behaviours and therefore don’t feel the need to curb them. Clearly as the reality of the situation is that you’re perpetuating the broken capitalist system, he claims it is more harmful than simply not even trying to aspire to ethical standards.

As with pretty much everything from Zizek, he makes a compelling (if sometimes inpenetrable!) case for this. I don’t think all ethical consumption can be grouped in this way, for instance there are undoubtedly ways to buy a product that directly benefits the producer, such as genuine right down the chain fairtrade and equitrade (a good example outlet would be the New Internationalist shop).

Similarly not all consumption is so fraught with these issues, such as locally made food stuffs, cooperatively produced goods. I wonder if he is making much of a distinction between consumerism and consumption. Either way, he gave a fantastic speech for the purposes of this RSA Animate.

I’ve chosen only two of the RSA Animate talks, but strongly suggest you do your own investigations if you haven’t been following them so far:
www.thersa.org/events/rsaanimate. 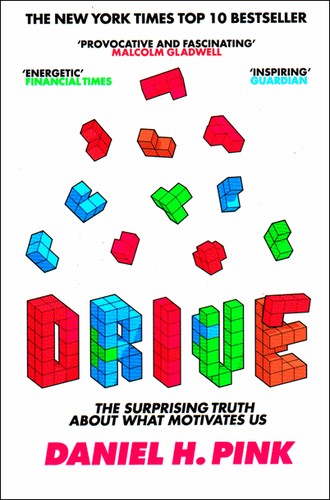 Dan Pink published Drive: The Surprising Truth About What Motivates Us in 2011 and gave this RSA Animate talk in 2010.

In a similar vein to other theories of behavioural motivations including those by Malcolm Gladwell, Clay Shirky, Chris Rose, et al, the book looks at what drives people to make certain decisions and be driven to achieve.

As with all these principles I’d suggest it probably isn’t something to engage with in isolation, but instead to find the guiding principles that are relevant to your context. Having an understanding of what makes people tick informed by a variety of these sources is most likely the most accurate and healthy approach.

The RSA Animate film below is a superb introduction to the key principles though, so check it out if you have 10 mins!

—-8<---- I'm still exploring these brilliant videos as well, and just wanted to add one other that's puts some interesting points about our assumptions of digital natives and digital immigrants, and the internet's relationship with politics by Evgeny Morozov:

Although I do think it comes back to the age old debate that people expect the internet to be biased and want to get passionate about it one way or the other. The fact is it’s a tool! Like a spade. A spade can be used to dig a grave, or to turn the soil of your vegetable plot…