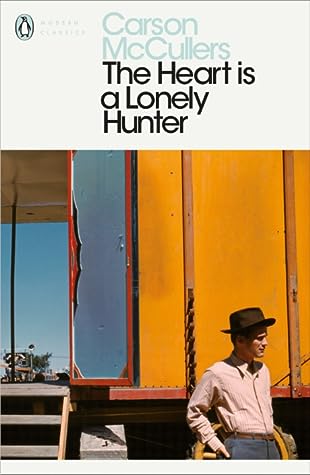 He felt they were laughing at him. Confusion caused him to forget what he had meant to say. The room was full of dark, strange faces and the air was too thick to breathe. He saw a door and staggered across to it. He was in a dark closet smelling of medicine. Then his hand was turning another doorknob.

He stood on the threshold of a small white room furnished only with an iron bed, a cabinet, and two chairs. On the bed lay the terrible Negro he had met on the stairs at Singer’s house. His face was very black against the white, stiff pillows. The dark eyes were hot with hatred but the heavy, bluish lips were composed. His face was motionless as a black mask except for the slow, wide flutters of his nostrils with each breath.

‘Wait—’ Jake said helplessly. ‘Why do you say that?’

Jake could not draw his eyes away from the Negro’s terrible face. ‘But why?’

‘You are a white man and a stranger.’

Jake did not leave. He walked with cumbersome caution to one of the straight white chairs and seated himself. The Negro moved his hands on the counterpane. His black eyes glittered with fever. Jake watched him. They waited. In the room there was a feeling tense as conspiracy or as the deadly quiet before an explosion.

It was long past midnight. The warm, dark air of the spring morning swirled the blue layers of smoke in the room. On the floor were crumpled balls of paper and a half-empty bottle of gin. Scattered ashes were gray on the counterpane. Doctor Copeland pressed his head tensely into the pillow. He had removed his dressing-gown and the sleeves of his white cotton nightshirt were rolled to the elbow. Jake leaned forward in his chair. His tie was loosened and the collar of his shirt had wilted with sweat. Through the hours there had grown between them a long, exhausting dialogue. And now a pause had come.

‘So the time is ready for—’ Jake began.

But Doctor Copeland interrupted him. ‘Now it is perhaps necessary that we—’ he murmured huskily. They halted. Each looked into the eyes of the other and waited. ‘I beg your pardon,’ Doctor Copeland said.

‘Well—’ Jake said. ‘I won’t say what I started to say. Instead we’ll have one last word about the South. The strangled South. The wasted South. The slavish South.’

‘And the Negro people.’

To steady himself Jake swallowed a long, burning draught from the bottle on the floor beside him. Then deliberately he walked to the cabinet and picked up a small, cheap globe of the world that served as a paperweight. Slowly he turned the sphere in his hands. ‘All I can say is this: The world is full of meanness and evil. Huh! Three fourths of this globe is in a state of war or oppression. The liars and fiends are united and the men who know are isolated and without defense. But! But if you was to ask me to point out the most uncivilized area on the face of this globe I would point here—’

‘Watch sharp,’ said Doctor Copeland. ‘You’re out in the ocean.’

Jake turned the globe again and pressed his blunt, grimy thumb on a carefully selected spot. ‘Here. These thirteen states. I know what I’m talking about. I read books and I go around. I been in every damn one of these thirteen states. I’ve worked in every one. And the reason I think like I do is this: We live in the richest country in the world. There’s plenty and to spare for no man, woman, or child to be in want. And in addition to this our country was founded on what should have been a great, true principle—the freedom, equality, and rights of each individual. Huh! And what has come of that start? There are corporations worth billions of dollars—and hundreds of thousands of people who don’t get to eat. And here in these thirteen states the exploitation of human beings is so that—that it’s a thing you got to take in with your own eyes. In my life I seen things that would make a man go crazy. At least one third of all Southerners live and die no better off than the lowest peasant in any European Fascist state. The average wage of a worker on a tenant farm is only seventy-three dollars per year. And mind you, that’s the average! The wages of sharecroppers run from thirty-five to ninety dollars per person. And thirty-five dollars a year means just about ten cents for a full day’s work. Everywhere there’s pellagra and hookworm and anaemia. And just plain, pure starvation. But!’ Jake rubbed his lips with the knuckles of his dirty fist. Sweat stood out on his forehead. ‘But!’ he repeated. ‘Those are only the evils you can see and touch. The other things are worse. I’m talking about the way that the truth has been hidden from the people. The things they have been told so they can’t see the truth. The poisonous lies. So they aren’t allowed to know.’

‘And the Negro,’ said Doctor Copeland. ‘To understand what is happening to us you have to—’

Jake interrupted him savagely. ‘Who owns the South? Corporations in the North own three fourths of all the South. They say the old cow grazes all over—in the south, the west, the north, and the east. But she’s milked in just one place. Her old teats swing over just one spot when she’s full. She grazes everywhere and is milked in New York. Take our cotton mills, our pulp mills, our harness factories, our mattress factories. The North owns them. And what happens?’ Jake’s mustache quivered angrily. ‘Here’s an example. Locale, a mill village according to the great paternal system of American industry. Absentee ownership. In the village is one huge brick mill and maybe four or five hundred shanties. The houses aren’t fit for human beings to live in. Moreover, the houses were built to be nothing but slums in the first place. These shanties are nothing but two or maybe three rooms and a privy—built with far less forethought than barns to house cattle. Built with far less attention to needs than sties for pigs. For under this system pigs are valuable and men are not. You can’t make pork chops and sausage out of skinny little mill kids. You can’t sell but half the people these days. But a pig—’

‘Hold on!’ said Doctor Copeland. ‘You are getting off on a tangent. And besides, you are giving no attention to the very separate question of the Negro. I cannot get a word in edgeways. We have been over all this before, but it is impossible to see the full situation without including us Negroes.’

‘Back to our mill village,’ Jake said. ‘A young linthead begins working at the fine wage of eight or ten dollars a week at such times as he can get himself employed. He marries. After the first child the woman must work in the mill also. Their combined wages come to say eighteen dollars a week when they both got work. Huh! They pay a fourth of this for the shack the mill provides them. They buy food and clothes at a company-owned or dominated store. The store overcharges on every item. With three or four younguns they are held down the same as if they had on chains. That is the whole principle of serfdom. Yet here in America we call ourselves free. And the funny thing is that this has been drilled into the heads of sharecroppers and lintheads and all the rest so hard that they really believe it. But it’s taken a hell of a lot of lies to keep them from knowing.’

‘There is only one way out—’ said Doctor Copeland.

‘Two ways. And only two ways. Once there was a time when this country was expanding. Every man thought he had a chance. Huh! But that period has gone—and gone for good. Less than a hundred corporations have swallowed all but a few leavings. These industries have already sucked the blood and softened the bones of the people. The old days of expansion are gone. The whole system of capitalistic democracy is—rotten and corrupt. There remain only two roads ahead. One: Fascism. Two: reform of the most revolutionary and permanent kind.’

‘And the Negro. Do not forget the Negro. So far as I and my people are concerned the South is Fascist now and always has been.’

‘The Nazis rob the Jews of their legal, economic, and cultural life. Here the Negro has always been deprived of these. And if wholesale and dramatic robbery of money and goods has not taken place here as in Germany, it is simply because the Negro has never been allowed to accrue wealth in the first place.’

‘The Jew and the Negro,’ said Doctor Copeland bitterly. ‘The history of my people will be commensurate with the interminable history of the Jew—only bloodier and more violent. Like a certain species of sea gull. If you capture one of the birds and tie a red string of twine around his leg the rest of the flock will peck him to death.’

Doctor Copeland took off his spectacles and rebound a wire around a broken hinge. Then he polished the lenses on his nightshirt. His hand shook with agitation. ‘Mr. Singer is a Jew.’

‘But I am positive that he is. The name, Singer. I recognized his race the first time I saw him. From his eyes. Besides, he told me so.’

‘Why, he couldn’t have,’ Jake insisted. ‘He’s pure Anglo-Saxon if I ever saw it. Irish and Anglo-Saxon.’

‘Very well,’ said Doctor Copeland. ‘We will not quarrel.’

Outside the dark air had cooled so that there was a chill in the room. It was almost dawn. The early morning sky was deep, silky blue and the moon had turned from silver to white. All was still. The only sound was the clear, lonely song of a spring bird in the darkness outside. Though a faint breeze blew in from the window the air in the room was sour and close. There was a feeling both of tenseness and exhaustion. Doctor Copeland leaned forward from the pillow. His eyes were bloodshot and his hands clutched the counterpane. The neck of his nightshirt had slipped down over his bony shoulder. Jake’s heels were balanced on the rungs of his chair and his giant hands folded between his knees in a waiting and childlike attitude. Deep black circles were beneath his eyes, his hair was unkempt. They looked at each other and waited. As the silence grew longer the tenseness between them became more strained.

At last Doctor Copeland cleared his throat and said: ‘I am certain you did not come here for nothing. I am sure we have not discussed these subjects all through the night to no purpose. We have talked of everything now except the most vital subject of all—the way out. What must be done.’

They still watched each other and waited. In the face of each there was expectation. Doctor Copeland sat bolt upright against the pillows. Jake rested his chin in his hand and leaned forward. The pause continued. And then hesitantly they began to speak at the same time.