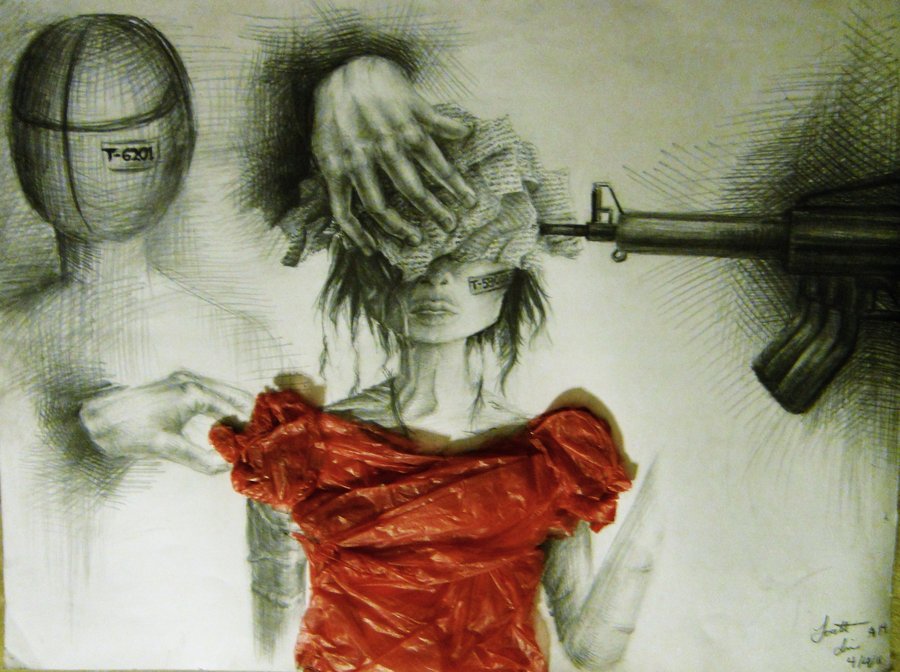 One evening, three soldiers went to the family’s hut and told her parents they needed Davi and another friend to go with them. They said they needed the girls to help them pick corn for a special event. Davi’s mother cried and wrapped her arms around her daughter.
“Take me,” she begged the soldiers. “Davi is a lazy girl. I can work faster and pick more corn in less time than she can.”
“No! We need her!” they retorted sharply. Davi cried harder at their words and clung desperately to her morther.
“Take me,” her father pleaded on his knees. “I can work faster than either one of them.”
“No! Don’t argue with us. We need her and she must perform her duty for the Angkar! She will return in the morning.” Then the soldiers grabbed Davi by her arms and pulled her from her mother’s shaking hug. Davi sobbed loudly, begging them to let her stay with her mother, but the soldiers dragged her on. Her mother fell to her knees, palms together, and pleaded with them not to take her only daughter. The father, still on his knees, lowered his head to the ground, banged his forehead on the dirt, and also pleaded with the soldiers. As the soldiers took her away, Davi turned around many times to see both her parents still the ground, palms together, praying for her. She looked back until she could see them no more.
The sounds of Davi’s parents’ anguished cries echoed into the night. Why were they doing this to her? In out hut the faces of my family were sombre and hopeless. Khouy and Pa sat on either side of Keav, who was contorted and white with fear, wondering what they would do if the soldiers took her. Keav, who is fourteen – the same age as Davi – sat holding her knees to her chest, her eyes misted over, her shoulders heaving visibly. Hearing her sobs, Ma left Geak with Chou, crawled over to Keav and wrapped her arms around her. Without a word, the rest of us moved to our sleeping spots and tried to go to sleep. Shivering, I crawled over to Chou and grabbed her wet hand and lay on my back, staring at the ceiling. In the black night, we tried to sleep but were kept awake by Davi’s mother, who wailed like a she-wold who had lost her cub.
True to their word, the soldiers returned Davi to her parents the next morning. But the Davi they returned was not the same one they took away. Davi stood before her parents in front of their hut, hair disheveled, face swollen, shoulders slumped, arms hanging like dead weights. She could not meet the gaze of her parents. Without a word, she walked past them and into the hut. They stepped aside to let her enter and followed her in. Their hut was quiet from then on.