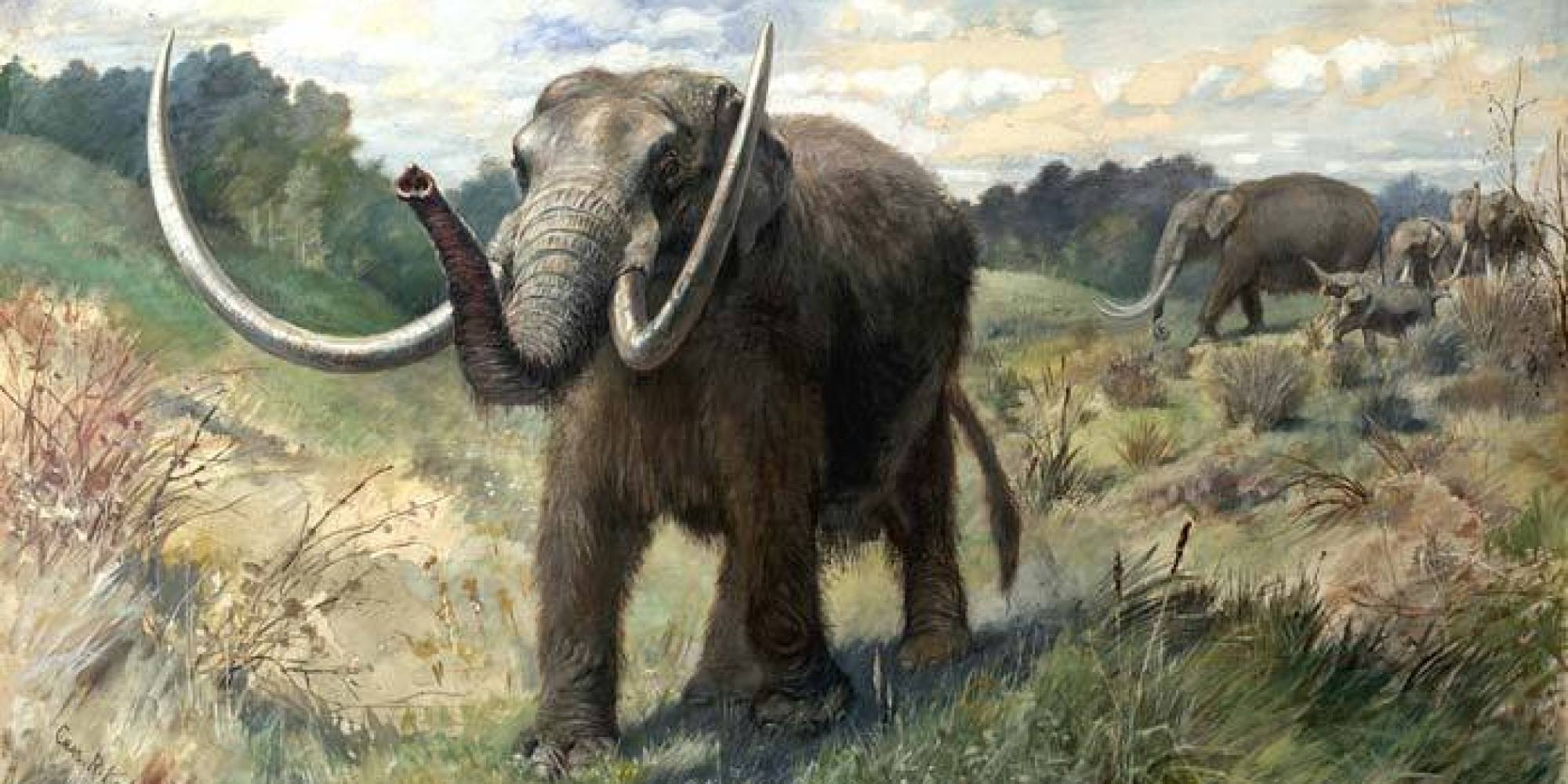 Credits to Luke Mitchell, published as Our Earth Has Endured Five Mass Extinctions: Here Comes The Sixth in Adbusters.

In 1739, Captain Charles Le Moyne was marching four hundred French and Indian troops down the Ohio River when he came across a sulphurous marsh where, as Elizabeth Kolbert puts it, “hundreds — perhaps thousands — of huge bones poked out of the muck, like spars of a ruined ship.”

The captain and his soldiers had no idea what sort of creatures the bones had supported, whether any of their living kin were nearby and, if so, what sort of threat they presented. The bones were similar to an elephant’s, but no one had seen anything like an elephant near the Ohio River, or indeed anywhere in the New World. Perhaps the animals had wandered off to the uncharted wilds out west? No one could say. The captain packed up a massive circular tusk, a three-foot-long femur and some ten-pound teeth, carried them around for several months as he went about the tricky task of eradicating the Chickasaw Nation, and finally delivered the relics, after a stopover in New Orleans, to Paris, where they confounded naturalists for several decades.

A contemporary reader may guess, correctly, that the bones belonged to a species of animal that had long since ceased to exist — in fact, they came from the Mammut Americanum, the American mastodon — but at the time such an imaginative leap would have been very difficult, because it hadn’t yet occurred to anyone that an entire species could cease to exist. “Aristotle wrote a ten-book History of Animals without ever considering the possibility that animals actually had a history,” Kolbert writes, and in Linnaeus’s Systema Naturae, published four years before Le Moyne’s discovery, “there is really only one kind of animal — those that exist.” The French naturalist Georges-Louis Leclerc thought the bones might belong to a species that, uniquely in history and for reasons unknown, had disappeared from the Earth, but his conjecture was widely rejected. Thomas Jefferson put forward the consensus view in 1781, in his Notes on the State of Virginia: “Such is the economy of nature, that no instance can be produced of her having permitted any one race of her animals to become extinct; of her having formed any link in her great work so weak as to be broken.”

In 1796, Georges Cuvier presented a new theory: nature did permit links to be broken, sometimes a lot of them all at once. Cuvier, just 27, was teaching at the Paris Museum of Natural History, one of the few institutions to survive the Terror, and had spent many hours studying its collection of fossils and bones. He noticed that the teeth of Le Moyne’s incognitum had unusual little bumps on them, like nipples. He was convinced they couldn’t be elephant teeth. He called their owner “mastodonte,” … “breast tooth.” Other remains were similarly unmatched to the contemporary world: the elephant-sized ground sloth, called Megatherium, bones of which had been discovered near Buenos Aires and reassembled in Madrid (Cuvier worked from sketches); the meat-eating aquatic lizard (now called Mosasaurus), whose massive fossilised jaw had been picked out of a quarry near Maastricht; the Woolly Mammoth, whose frozen remains were everywhere in Siberia. Such creatures must have populated a lost world. “But what was this primitive earth?” Cuvier asked, “and what revolution was able to wipe it out?”

These were interesting questions, but Cuvier’s contemporaries were slow to consider answers. More and more they were coming to accept that occasionally species might disappear — Darwin would soon propose that “the appearance of new forms and the disappearance of old forms” were procedurally “bound together” by natural selection — but evolution was a gradual process. Mass extinction, “revolution,” was something else. The claim that nature could undergo a sudden radical shift seemed not just historically unfounded but scientifically (and perhaps politically) untenable. Charles Lyell countered Cuvier’s anarchic “catastrophism” with stately “uniformitarianism.” All change, geological or biological, took place gradually, steadily. Any talk of catastrophe, Lyell admonished, was “unphilosophical.”

The evidence of catastrophe accrued nonetheless. Geologists have understood since the 17th century that sedimentary layers of rock and soil mark the passage of time, the youngest layers at the top, the oldest at the bottom, and that sometimes geological forces will push up a slice of the world that contains several aeons’ worth of fossil-rich strata, which we can read like the lines of a census report. The fossils in most layers did indeed demonstrate a uniform degree of biodiversity, but some indicated a massive decline. Where once there were many different forms of life, suddenly there were few.

The lesson that mass extinction is normal is hard to accept. Scientists are beginning to recognise that we’re in the middle of another event, perhaps the sixth mass extinction, but that recognition has been slow in coming.

Palaeontologists and geologists now generally agree that the Earth has endured five major extinctions, and more than a dozen lesser ones. The first took place 450 million years ago, during the late Ordovician period, and the most lethal 200 million years later, during the Permian-Triassic — “the great dying,” when nine out of ten marine species vanished. The most terrifying of the mass extinctions, though, was surely the fifth, the Cretaceous-Palaeogene incident, which began 65 million years ago when an asteroid the size of Manhattan smashed into the Yucatan Peninsula with the explosive impact of a hundred million hydrogen bombs. The palaeobiologist Peter Ward, writing last year in Nautilus, calls it life’s worst day on Earth, when the world’s global forest burned to the ground, absolute darkness from dust clouds encircled the Earth for six months, acid rain burned the shells off of calcareous plankton, and a tsunami picked up all of the dinosaurs on the vast, Cretaceous coastal plains, drowned them, and then hurled their carcasses against whatever high elevations finally subsided the monster waves.

The lesson that mass extinction is normal is hard to accept. Scientists are beginning to recognise that we’re in the middle of another event, perhaps the sixth mass extinction, but that recognition has been slow in coming. In 1963, Colin Bertram, a marine biologist and polar explorer, warned that human expansion could destroy “most of the remaining larger mammals of the world, very many of the birds, the larger reptiles, and so many more both great and small,” and in 1979 the biologist Norman Myers published a little-read book called The Sinking Ark, showing with statistics that Bertram had been correct. But it wasn’t until the 1990s that large numbers of biologists began to take such concerns seriously. In 1991, the palaeobiologist David Jablonski published a paper in Science that compared the present rate of loss to that of previous mass extinctions. Other papers followed and by 1998 a survey by the American Museum of Natural History found that seven out of ten biologists suspected another mass extinction was underway. In 2008, two such biologists, David Wake and Vance Vredenburg, asked in a widely discussed paper, “Are We in the Midst of the Sixth Mass Extinction?” The answer arrived in 2012 from a large team of biologists and palaeontologists writing in Nature: we almost certainly are. If we continue at the current rate of destruction, about three-quarters of all living species will be lost within the next few centuries.