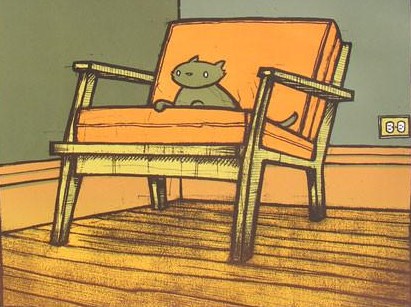 If we accept objects don’t exist…

There is a chair in front of me. A nice red wooden chair with four legs, a seat to sit on, a rest to support the sitter’s back. Does this chair exist by itself? Of course it does: it exists regardless of me. But wait: we call it a chair because we sit on it. Would there be the concept of a chair without its relation to us, without sitting humankind?

Maybe not, but even if someone were unaware of a chair’s intended function, its components would still exist, for instance the smooth red wood it is made of. What does “red” mean, though? It refers to an interaction between the wood, light scattering off it and particular receptors in our eyes. Most animals don’t see colours like humans, though.

Regardless of that, the atoms of the wood are there, even in the absence of our receptors or the light that may bounce off those atoms. Dig down deep enough, and things have properties that are independent of anything else, right?

Perhaps not. Quantum physics, which describes the bizarre behaviour of the physical world at the most elementary level we know, may be telling us the opposite. Things don’t have properties exclusive to themselves: their properties only exist by virtue of their relationship to other things, just like there are really no “chairs” without someone around to interact with them and see them as such. Coming to terms with this idea may clarify the persistently mysterious nature of the quantum world.