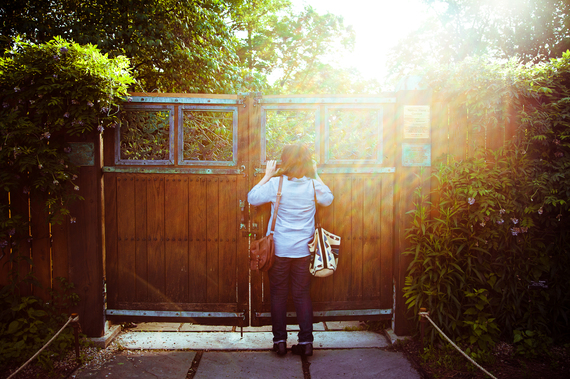 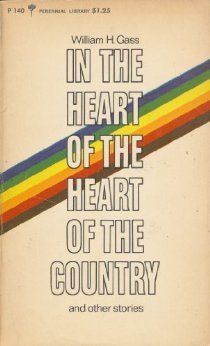 My house has porches fore and aft and holds a corner. I spy with care and patience on my neighbors but I seldom speak. They watch me too, of course, and so I count our evils even, though I guard my conscience with a claim to scientific coldness they cannot possess. For them no idleness is real. They see it, certainly. I sit with my feet on the rail. My wife rocks by me. The hours pass. We talk. I dream. I sail my boats on their seas. I rest my stories on their backs. They cannot feel them. Phantoms of idleness never burden. If I were old or sick or idiotic, if I shook in my chair or withered in a southern window, they would understand my inactivity, and approve; but even the wobblers make their faithful rounds. They rake their leaves. They mow and shovel. They clip their unkempt hedges and their flowers. Their lives are filled by this. I do no more.

Mrs. Mean, for instance: what could she think? She is never idle. She crowds each moment with endeavor.

When I had my cottage I used to see, on Sabbaths, a wire-haired lady drive her family to the beach. She rented everything. Her family dressed in the car, the windows draped with blankets, while the lady in her jacket rapped on the hood for speed, then rushed them to the surf. She always gestured grandly at the sea and swung a watch by its strap. “So much money, so much time, let us amuse,” she always said, and sat on a piece of driftwood and shelled peas. The children dabbled at the water with their fingers. Her husband, a shriveled, mournful soul, hung at the water’s edge and slowly patted his wrists with ocean. Inertia enraged her. She thrust her pods away, pouring her lap in a jar. “Begin, begin,” she would shout then, jumping up, displaying the watch. The children would squat in the sand until foam marked their bottoms, staring in their pails. Papa would drip water to his elbows and upper arm while Mama receded to her log. The children fought then. It began invisibly. It continued silently, without emotion. They kicked and bit and stabbed with their shovels. When she found them fighting she would empty her lap and start up, shaking the watch and shouting, but the children fought on bitterly, each one alone, throwing sand and swinging their pails, rolling over and over on the beach and in and out of the moving ocean. She ran toward them but the sea slid up the sand and drove her off, squealing on tiptoe, scuffing and denting the smooth sand. The children plunged into the surf and broke apart. “Don’t lose your shovels!” The waves washed the children in. They huddled on dark patches of beach. At last their mother would run among them, quickly, between breaths of ocean, and with her hands on her hips, her legs apart, she would throw her head back in the mimic of gargantuan guffaws, soundless and shaking. “Laugh,” she would say then, “there is only an hour.”

The people by me primitively guess that I am enemy and hate me: not alone for being different, or disdaining work, or worse, not doing any; but for something that would seem, if spoken for them, words of magic; for I take their souls away — I know it — and I play with them; I puppet them up to something; I march them through strange crowds and passions; I snuffle at their roots.

From the first they saw me watching. I can’t disguise my interest. They expected, I suppose, that I would soon be round with stories. I would tell Miss Matthew of Mr. Wallace, and Mr. Wallace of Mrs. Turk, and Miss Matthew and Mr. Wallace and Mrs. Turk would take the opportunity to tell me all they knew of one another, all they knew about diseases, all they thought worthy of themselves and could remember of their relatives, and the complete details of their many associations with violent forms of death. But when I communicated nothing to them; when I had nothing, in confidence, to say to anyone; then they began to treat my eyes like marbles and to parade their lives indifferently before me, as if I were, upon my porch, a motionless, graven idol, not of their religion, in my niche; yet I somehow retained my mystery, my potency, so that the indifference was finally superficial and I fancy they felt a compulsion to be observed—watched in all they did. I should say they dread me as they dread the supernatural. How Mr. Wallace dreads it, dead as he nearly is, twisted on his cane. Every morning, when he can, he comes down the block past my porch, his left arm hung like a shawl from his shoulder, shuffling his numb feet, poking cracks. “I’ll have to go back.” His voice is hoarse and loud. “I used to walk to the end of the street.” He mops his face and dries his running eyes. “Hot,” he shouts, propped against his cane. “Last summer I went to the end.” The cane comes out of his belly. He sways. Will he die like this? palsy seize him? sweat break before that final clip of pain and his surprise? The cane will gouge cement. His hat will float into my privet hedge and the walk drive blood from his nose.

He turns at last and I relax. His eyes are anxious for a friend to cry at, to bellow to a stop. He squints up the street, and if, by any chance, someone appears, Mr. Wallace grins and howls hello. He inches forward, pounds the walk, roars reports of weather for the middle of the night. “Know what it was at one? Eighty-seven. June, not hell we’re in, but eighty-seven. I ain’t even eighty-seven. There was a cloud across the moon at two. It rained alongside five but nothing cooled.” And the dawn was gray as soapy water. Fog lay between garages. A star, almost hidden by the morning light, fell past the Atlas stack and died near Gemini. The friend is fixed and Mr. Wallace closes, his face inflamed, his eyeballs rolling. He describes the contours of his aches, the duration, strength, and quality of every twinge, the subtle nuances of vague internal hurts. He distinguishes blunt pains from sharp, pale ones from bright, wiry from watery, morning, night. His brown teeth grin. Is it better, he discourses, to suffer when it’s hot or when it’s cold, while standing or sitting, reading or walking, young or old?

“I say it’s better to be cold. You’ll say not. I know what you’ll say. You’ll say, ‘The knuckle, now, if rapped when cold, will ring.’ I know. A cold shin on the sharp, hard edge of something — that’s a real one. I know. Never mind. Hurts are all fires. Keep you warm. Know those fellows like that fellow in a book I read about? His name was Scott. You know him? Froze. Scott. If I’d been with him, freezing, I’d of pounded on me some great sore so when I hit it I would burn all over. Keep you warm. Say, they didn’t think of that, did they? Froze. I read about it. I read a lot, except for seeing, or I would. Half an hour. I used to, all the time. My eyes burn though. Your eyes burn sometimes? Scott. Froze. Hey, you know freezing’s quiet. Ha! You know — it’s warm!”

Mr. Wallace wavers on his stick and spits. The whole street echoes with him. His friend dwindles.

Portents are next. They follow pain as pain the weather. Anyone is a friend of Mr. Wallace who will stay.