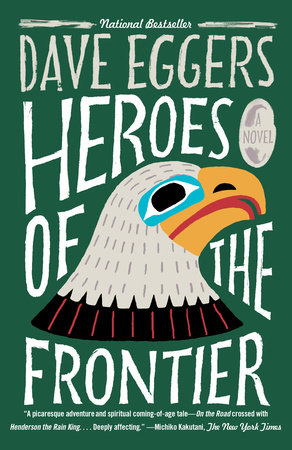 “My kids should eat,” Josie said, hoping to focus herself and Sam on practical matters.
“Doug’s on it,” Sam said, nodding toward a bonfire, which Josie realized was also the barbecue. This was a barbarian arrangement — a vast open fire being fed with giant logs, and over it a grill held high by a complicated latticework of sticks.
“They like bratwurst?” Doug asked.
Josie said they did, knowing she would have to cut them into tiny pieces and tell her children they were hotdogs.
Paul and Ana returned with the twins, thirteen years old, identical, willowy and athletic, taller than their mother or Josie. Their hair was strawberry blond and thick, and with their light freckles and their eyes dark and bright and intense and laughing, they had the look of medieval warrior-women just back from joyous plundering and man-beating and whale-riding. They strode to Josie and hugged her as if they really knew and loved her. Josie, overcome, told them they were beautiful, that she couldn’t believe it, and they each looked directly at her, actually listening. They were not quite of this world.
They took their leave, throwing sticks that the many large dogs could chase, and Josie gave her children plates piled with fragments of bratwurst and corn grilled in foil. Her kids sat on an enormous log, next to a line of boys, all of whom were nine or ten years old, and each of whom was holding his own carving knife. As Paul and Ana ate, the boys whittled, their fists white, their long hair covering their eyes. Paul was watching passively, but Ana was enthralled. Josie knew she would want a knife and would talk about nothing but knives for days.
“You look tired,” Sam said.
“You’re sunburned,” Josie said. “That your boyfriend?” She indicated Doug, who was dodging the changing direction of the bonfire’s smoke. Sam shrugged and went to Doug, rubbing his back and then ducking from the smoke as it enveloped her.
Josie glanced over to see that Ana had repositioned herself. She was now sitting on the sand in front of the child-carvers, her eyes at blade level. The boys were laughing, thinking Ana was a trip, that this girl was the craziest thing they’d ever seen. Then Ana’s eyes lit on an idea, and she lifted her sweater, the Bolivian one, all that heavy wool woven loosely, pulled it over her head with great effort to reveal a Green Lantern shirt underneath. She was showing the boys that she was no girl, no simple girl — that she was like them, that she liked Green Lantern, that she appreciated fighting evil with great supernatural force, appreciated the cutting of wood with big knives. The boys didn’t care enough, though: they glanced, chuckled, but said nothing. Ana was not dissuaded. Shivering in her Green Lantern shirt — the temperature was dropping into the fifties — she squeezed in next to them on the log, every so often putting her hand on one boy’s forearm, as if to participate somehow in the carving. As if, through this human transference, she could be carving, too. Josie served her a second brat on a paper plate and Ana devoured it, never taking her eyes off the boys and their knives.
Paul, meanwhile, took his plate and walked to the twins near the eagle and the boulder on the beach. Josie watched as he made his way directly to them, and then stopped short. The girls turned toward him and seemed to acknowledge his presence in some satisfactory way. He squatted on the beach and ate his food and the three of them looked at the eagle, and a pair of horseback riders trotted slowly across the horizon in the shallow water, until one of the girls threw a rock close to the bird, and it lifted off, its shoulders seeming tired, the movement of its wings far too slow and labored to create flight, but then it was up, rising like it was nothing, flight was nothing, the planet was nothing, nothing at all, just another place to leave.

Slip of the Tongue – Adriel Luis