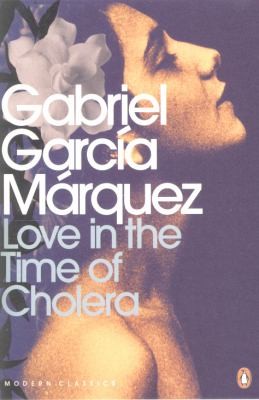 By two o’clock in the morning they had each drunk three brandies and he knew, in truth, that he was not the man she was waiting for, and he was glad to know it.

“Bravo, lionlady,” he said when he left. “We have killed the tiger.”
It was not the only thing that came to an end that night. The evil lie about the pavilion of consumptives had ruined his sleep, for it had instilled in him the inconceivable idea that Fermina Daza was mortal and as a consequence might die before her husband. But when he saw her stumble at the door of the movie theater, by his own volition he took another step toward the abyss with the sudden realization that he, and not she, might be the one to die first. It was the most fearful kind of presentiment, because it was based on reality. The years of immobilized waiting, of hoping for good luck, were behind him, but on the horizon he could see nothing more than the unfathomable sea of imaginary illnesses, the drop-by-drop urinations of sleepless nights, the daily death at twilight. He thought that all the moments in the day, which had once been his allies and sworn accomplices, were beginning to conspire against him. A few years before he had gone to a dangerous assignation, his heart heavy with terror of what might happen, and he had found the door unlocked and the hinges recently oiled so that he could come in without a sound, but he repented at the last moment for fear of causing a decent married woman irreparable harm by dying in her bed. So that it was reasonable to think that the woman he loved most on earth, the one he had waited for from one century to the next without a sigh of disenchantment, might not have the opportunity to lead him by the arm across a street full of lunar grave mounds and beds of windblown poppies in order to help him reach the other side of death in safety.

The truth is that by the standards of his time, Florentino Ariza had crossed the line into old age. He was fifty-six well-preserved years old, and he thought them well lived because they were years of love. But no man of the time would have braved the ridicule of looking young at his age, even if he did or thought he did, and none would have dared to confess without shame that he still wept in secret over a rebuff received in the previous century. It was a bad time for being young: there was a style of dress for each age, but the style of old age began soon after adolescence, and lasted until the grave. More than age, it was a matter of social dignity. The young men dressed like their grandfathers, they made themselves more respectable with premature spectacles, and a walking stick was looked upon with favor after the age of thirty. For women there were only two ages: the age for marrying, which did not go past twenty-two, and the age for being eternal spinsters: the ones left behind. The others, the married women, the mothers, the widows, the grandmothers, were a race apart who tallied their age not in relation to the number of years they had lived but in relation to the time left to them before they died. Florentino Ariza, on the other hand, faced the insidious snares of old age with savage temerity, even though he knew that his peculiar fate had been to look like an old man from the time he was a boy. At first it was a matter of necessity. Transito Ariza pulled apart and then sewed together again for him the clothes that his father decided to discard, so that he went to primary school wearing frock coats that dragged on the ground when he sat down, and ministerial hats that came down over his ears despite the cotton batting on the inside to make them smaller. Since he had also worn glasses for myopia from the age of five, and had his mother’s Indian hair, as bristly and coarse as horsehair, his appearance clarified nothing. It was fortunate that after so much governmental instability because of so many superimposed civil wars, academic standards were less selective than they had been, and there was a jumble of backgrounds and social positions in the public schools. Half-grown children would come to class from the barricades, smelling of gunpowder, wearing the insignias and uniforms of rebel officers captured at gunpoint in inconclusive battles, and carrying their regulation weapons in full view at their waists. They shot each other over disagreements in the playground, they threatened the teachers if they received low grades on examinations, and one of them, a third-year student at La Salle Academy and a retired colonel in the militia, shot and killed Brother Juan Eremita, Prefect of the Community, because he said in catechism class that God was a full-fledged member of the Conservative Party.

On the other hand, the sons of the great ruined families were dressed like old-fashioned princes, and some very poor boys went barefoot. Among so many oddities originating in so many places, Florentino Ariza was certainly among the oddest, but not to the point of attracting undue attention. The harshest thing he heard was when someone shouted to him on the street: “When you’re ugly and poor, you can only want more.” In any event, the apparel imposed by necessity became, from that time on and for the rest of his life, the kind best suited to his enigmatic nature and solemn character. When he was promoted to his first important position in the R.C.C., he had clothes made to order in the same style as those of his father, whom he recalled as an old man who had died at Christ’s venerable age of thirty-three. So that Florentino Ariza always looked much older than he was. As a matter of fact, the loose-tongued Brigida Zuleta, a brief love who dished up unwashed truths, told him on the very first day that she liked him better without his clothes because he looked twenty years younger when he was naked. However, he never knew how to remedy that, first because his personal taste would not allow him to dress in any other way, and second because at the age of twenty no one knew how to dress like a younger man, unless he were to take his short pants and sailor hat out of the closet again.