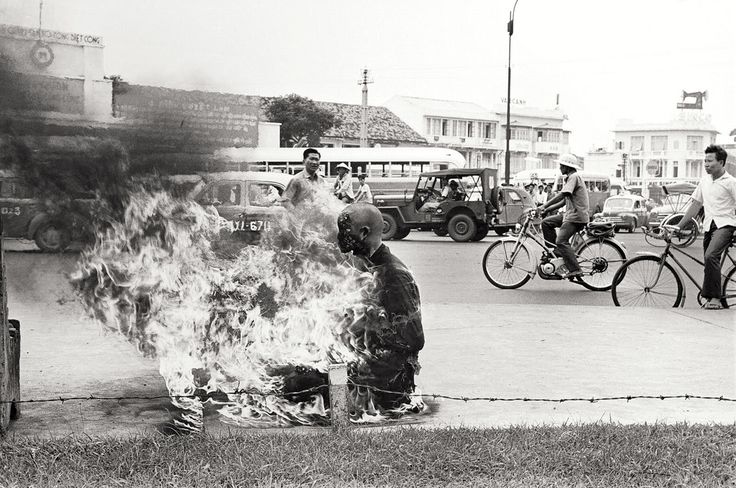 Five years pass, five years searching for an explanation, going back over everything, over the circumstances that shaped her, the people and the events that influenced her, and none of it adequate to begin to explain the bombing until he remembers the Buddhist monks, the self-immolation of the Buddhist monks… Of course she was just ten then, maybe eleven years old, and in the years between then and now a million things had happened to her, to them, to the world. Though she had been terrified for weeks afterward, crying about what had appeared on television that night, talking about it, awakened from her sleep by dreaming about it, it hardly stopped her in her tracks. And yet when he remembers her sitting there and seeing that monk going up in flames – a unprepared as the rest of the country for what she was seeing, a kid half watching the news with her mother and father one night after dinner – he is sure he has unearthed the reason for what happened.

It was back in ’62 or ’63, around the time of Kennedy’s assassination, before the war in Vietnam had begun in earnest, when, as far as everybody knew, America was merely at the periphery of whatever was going haywire over there. The monk who did it was in his seventies, thin, with a shaved head and wearing a saffron robe. Cross-legged and straight-backed on an empty city street somewhere in South Vietnam, gracefully seated like that in front of a crowd of monks who had gathered to witness the event as though to observe a religious ritual, the monk had upended a large plastic canister, poured the gasoline or the kerosene, whatever it was, out of the canister and over himself and drenched the asphalt around him. Then he struck the match, and a nimbus of ragged flames came roiling out of him.

There is sometimes a performer in a circus, advertised as the fire eater, who makes flames seemingly shoot out of his mouth, and there on the street of some city in South Vietnam, this shaven-headed monk somehow made it look as though flames, instead of assaulting him from without, were shooting forward into the air from within him, not just from his mouth, however, but in an instantaneous eruption from his scalp and his face and his chest and his lap and his legs and his feet. Because he remained perfectly upright, indicating in no way that he could feel himself to be on fire, because he did not so much as move a muscle, let alone cry out, it at first looked very much like a circus stunt, as though what was being consumed were not the monk but the air, the monk setting the air on fire while no harm at all befell him. His posture remained exemplary, the posture of someone altogether elsewhere leading another life entirely, a servant of selfless contemplation, meditative, serene, a mere link in the chain of being untouched by what happened to be happening to him within view of the entire world. No screaming, no writhing, just his calmness at the heart of the flames – no pain registering on anyone on camera, only on Merry and the Swede and Dawn, horrified together in their living room. Out of nowhere and into their home, the nimbus of flames, the upright monk, and the sudden liquefaction before he keels over; into their home all those other monks, seated along the curbstone impassively looking on, a few with their hands pressed together before them in the Asian gesture of peace and unity; into their home on Arcady Hill Road the charred and blackened corpse on its back in that empty street.

That was what had done it. Into their home the monk came to stay, the Buddhist monk calmly sitting out his burning up as though he were a man both fully alert and anesthetised. The television transmitting the immolation must have done it. If their set had happened to be tuned to another channel or turned off or broken, if they had all been out together as a family for the evening, Merry would never have seen what she shouldn’t have seen and would never have done what she shouldn’t have done. What other explanation was there?
“These gentle p-p-people,” she said, while the Swede gathered her into his lap, a lanky eleven-year-old girl, held her to him, rocking and rocking her in his arms, “these gentle p-p-p-people…” At first she was so frightened she couldn’t even cry – she could get out of her just those three words. Only later, a moment after going to bed, when she got up and with a yelp ran from her room down the corridor and into their room and asked, as she hadn’t since she was five, to get into bed with them, was she able to let everything out of her, everything awful that she was thinking. All the lights remained on in their bedroom and they let her go on and on, sitting up between them in their bed and talking until there were no words left inside her to panic or terrorize her. When she fell asleep, sometime after three, it was with there lights all still burning – she would not let him turn them off – but she had at least by then talked herself out enough and cried herself out enough to succumb to exhaustion.
“Do you have to m-m-melt yourself down in fire to bring p-p-people to their s-senses? Does anybody care? Does anybody have a conscience? Doesn’t anybody in this w-world have a conscience left?” Every time “conscience” crossed her lips she began to cry.