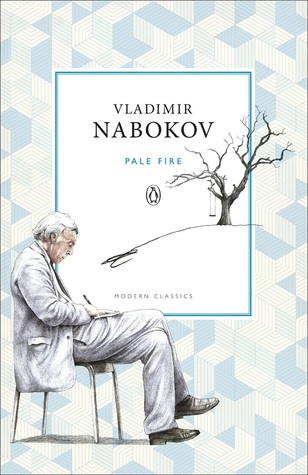 Consuming something that had been handled by a fellow creature was, I explained to the rubicund convives, as repulsive to me as eating any creature, and that would include – lowering my voice – the pulpous pony-tailed girl student who served us and licked her pencil. Moreover, I had already finished the fruit brought with me in my briefcase, so I would content myself, I said, with a bottle of good college ale. My free and simple demeanor set everybody at ease. The usual questions were fired at me about eggnogs and milkshakes being or not being acceptable to one of my persuasion. Shade said that with him it was the other way around: he must make a definite effort to partake of a vegetable. Beginning a salad, was to him like stepping into sea water on a chilly day, and he had always to brace himself in order to attack the fortress of an apple. I was not yet used to the rather fatiguing jesting and teasing that goes on among American intellectuals of the inbreeding academic type and so abstained from telling John Shade in front of all those grinning old males how much I admired his work lest a serious discussion of literature degenerate into mere facetiation. Instead I asked him about one of my newly acquired students who also attended his course, a moody, delicate, rather wonderful boy; but with a resolute shake of his hoary forelock the old poet answered that he had ceased long ago to memorize faces and names of students and that the only person in his poetry class whom he could visualize was an extramural lady on crutches. “Come, come,” said Professor Hurley, “do you mean, John, you really don’t have a mental or visceral picture of that stunning blonde in the black leotard who haunts Lit. 202?” Shade, all his wrinkles beaming, benignly tapped Hurley on the wrist to make him stop. Another tormentor inquired if it was true that I had installed two ping-pong tables in my basement. I asked, was it a crime? No, he said, but why two? “Is that a crime?” I countered, and they all laughed.

Despite a wobbly heart (see line 735), a slight limp, and a certain curious contortion in his method of progress, Shade had an inordinate liking for long walks, but the snow bothered him, and he preferred, in winter, to have his wife call for him after classes with the car. A few days later, as I was about to leave Parthenocissus Hall – or Main Hall (or now Shade Hall, alas), I saw him waiting outside for Mrs. Shade to fetch him. I stood beside him for a minute, on the steps of the pillared porch, while pulling my gloves on, finger by finger, and looking away, as if waiting to review a regiment: “That was a thorough job,” commented the poet. He consulted his wrist watch. A snowflake settled upon it. “Crystal to crystal,” said Shade. I offered to take him home in my powerful Kramler. “Wives, Mr. Shade, are forgetful.” He cocked his shaggy head to look at the library clock. Across the bleak expanse of snow-covered turf two radiant lads in colorful winter clothes passed, laughing and sliding. Shade glanced at his watch again and, with a shrug, accepted my offer.

I wanted to know if he did not mind being taken the longer way, with a stop at Community Center where I wanted to buy some chocolate-coated cookies and a little caviar. He said it was fine with him. From the inside of the supermarket, through a plate-glass window, I saw the old chap pop into a liquor store. When I returned with my purchases, he was back in the car, reading a tabloid newspaper which I had thought no poet would deign to touch. A comfortable burp told me he had a flask of brandy concealed about his warmly coated person. As we turned into the driveway of his house, we saw Sybil pulling up in front of it. I got out with courteous vivacity. She said: “Since my husband does not believe in introducing people, let us do it ourselves: You are Dr. Kinbote, aren’t you? And I am Sybil Shade.” Then she addressed her husband saying he might have waited in his office another minute: she had honked and called, and walked all the way up, et cetera. I turned to go, not wishing to listen to a marital scene, but she called me back: “Have a drink with us,” she said, “or rather with me, because John is forbidden to touch alcohol.” I explained I could not stay long as I was about to have a kind of little seminar at home followed by some table tennis, with two charming identical twins and another boy, another boy.

Henceforth I began seeing more and more of my celebrated neighbor. The view from one of my windows kept providing me with first-rate entertainment, especially when I was on the wait for some tardy guest. From the second story of my house the Shades’ living-room window remained clearly visible so long as the branches of the deciduous trees between us were still bare, and almost every evening I could see the poet’s slippered foot gently rocking. One inferred from it that he was sitting with a book in a low chair but one never managed to glimpse more than that foot and its shadow moving up and down to the secret rhythm of mental absorption, in the concentrated lamplight. Always at the same time the brown morocco slipper would drop from the wool-socked foot which continued to oscillate, with, however, a slight slackening of pace. One knew that bedtime was closing in with all its terrors; that in a few minutes the toe would prod and worry the slipper, and then disappear with it from my golden field of vision traversed by the black bend-let of a branch. And sometimes Sybil Shade would trip by with the velocity and swinging arms of one flouncing out in a fit of temper, and would return a little later, at a much slower gait, having, as it were, pardoned her husband for his friendship with an eccentric neighbor; but the riddle of her behavior was entirely solved one night when by dialing their number and watching their window at the same time I magically induced her to go through the hasty and quite innocent motions that had puzzled me.

Alas, my peace of mind was soon to be shattered. The thick venom of envy began squirting at me as soon as academic suburbia realized that John Shade valued my society above that of all other people. Your snicker, my dear Mrs. C., did not escape our notice as I was helping the tired old poet to find his galoshes after that dreary get-together party at your house. One day I happened to enter the English Literature office in quest of a magazine with the picture of the Royal Palace in Onhava, which I wanted my friend to see, when I overheard a young instuctor in a green velvet jacket, whom I shall mercifully call Gerald Emerald, carelessly saying in answer to something the secretary had asked: “I guess Mr. Shade has already left with the Great Beaver.” Of course, I am quite tall, and my brown beard is of a rather rich tint and texture; the silly cognomen evidently applied to me, but was not worth noticing, and after calmly taking the magazine from a pamphlet-cluttered table, I contented myself on my way out with pulling Gerald Emerald’s bowtie loose with a deft jerk of my fingers as I passed by him. There was also the morning when Dr. Nattochdag, head of the department to which I was attached, begged me in a formal voice to be seated, then closed the door, and having regained, with a downcast frown, his swivel chair, urged me “to be more careful.” In what sense, careful? A boy had complained to his adviser. Complained of what, good Lord? That I had criticized a literature course he attended (“a ridiculous survey of ridiculous works, conducted by a ridiculous mediocrity”). Laughing in sheer relief, I embraced my good Netochka, telling him I would never be naughty again. I take this opportunity to salute him. He always behaved with such exquisite courtesy toward me that I sometimes wondered if he did not suspect what Shade suspected, and what only three people (two trustees and the president of the college) definitely knew.
Oh, there were many such incidents. In a skit performed by a group of drama students I was pictured as a pompous woman hater with a German accent, constantly quoting Housman and nibbling raw carrots; and a week before Shade’s death, a certain ferocious lady at whose club I had refused to speak on the subject of “The Hally Vally” (as she put it, confusing Odin’s Hall with the title of a Finnish epic), said to me in the middle of a grocery store, “You are a remarkably disagreeable person. I fail to see how John and Sybil can stand you,” and, exasperated by my polite smile, she added: “What’s more, you are insane.”

But let me not pursue the tabulation of nonsense.