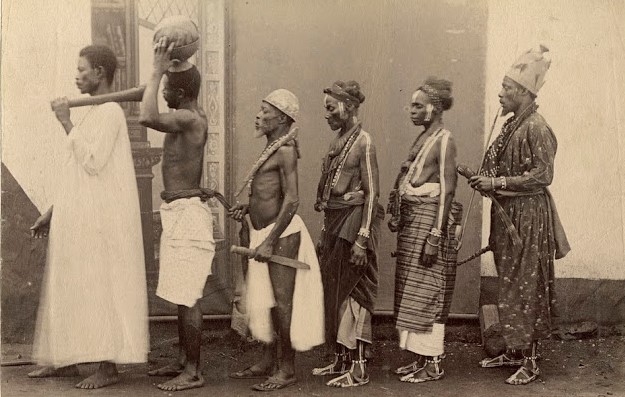 The men continued sipping the wine in silence for a while. In the trees, the birds were calling each other to sleep. A spider crawled over James’s bare foot, and he thought of the Anansi stories his mother used to tell him, and still told his younger brothers and sisters. “Have you heard the story of Anansi and the sleeping bird?” she would ask them, mischief dancing behind her eyes, and they would all shout “No!” and giggle into their hands, thrilled by the lie they were telling, for they had all heard it many times before, learning then that a story was nothing more than a lie you got away with.

David tipped the calabash back again, his head tipping back with it so that he could completely empty the contents. He belched, then wiped his mouth with the back of his hand. “Is it true?” he asked. “The rumors about the British abolishing slavery soon?”

Quey shrugged his shoulders. “The year James was born, they told everyone in the Castle that the slave trade was abolished and that we could not sell our slaves to America anymore, but did that stop the tribes from selling? Did that make the British leave? Don’t you see this war the Asantes and the British are fighting now and will continue to fight for far longer than you or I or even James can live to see? There’s more at stake here than just slavery, my brother. It’s a question of who will own the land, the people, the power. You cannot stick a knife in a goat and then say, Now I will remove my knife slowly, so let things be easy and clean, let there be no mess. There will always be blood.”

James had heard this speech or something like it many times before. The British were no longer selling slaves to America, but slavery had not ended, and his father did not seem to think that it would end. They would just trade one type of shackles for another, trade physical ones that wrapped around wrists and ankles for the invisible ones that wrapped around the mind. James hadn’t understood this when he was younger, when the legal slave exportation had ended and the illegal one had begun, but he understood now. The British had no intention of leaving Africa, even once the slave trade ended. They owned the Castle, and, though they had yet to speak it aloud, they intended to own the land as well.