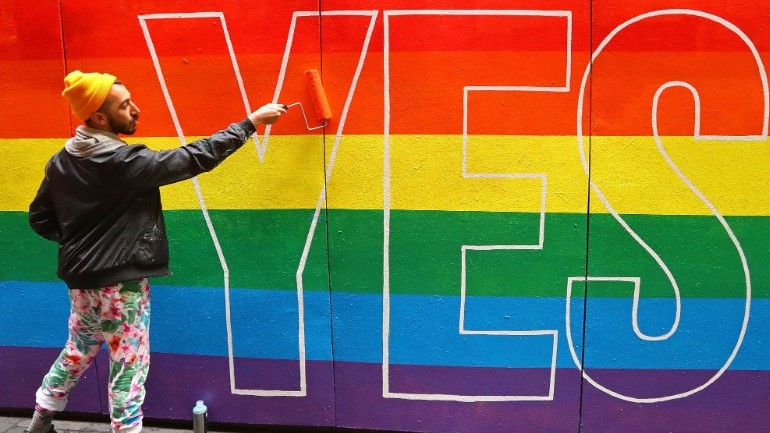 Re: “Not in This Town, Friend,” June 15 issue, “My Turn” Lifestyle Section

Very much enjoyed your recent article and wish to weigh in with some of my thoughts on this troubling matter. I agree with all you had to say. Like any sane person, I am against Same-Sex Marriage, and in favor of a constitutional amendment to ban it. To tell the truth, I feel that, in the interest of true moral rigor, it is necessary for us to go a step further, which is why I would like to propose a supplementary constitutional amendment. In the town where I live, I have frequently observed a phenomenon I have come to think of as Samish-Sex Marriage. Take, for example, “K,” a male friend of mine, of slight build, with a ponytail. “K” is married to “S,” a tall, stocky female with extremely short hair, almost a crewcut. Often, while watching “K” play with his own ponytail as “S” towers over him, I have wondered, Isn’t it odd that this somewhat effeminate man should be married to this somewhat masculine woman? Is “K” not, at some level, imperfectly expressing a slight latent desire to be married to a man? And is not “S,” at some level, imperfectly expressing a slight latent desire to be married to a woman? Then I ask myself, Is this truly what God had in mind?

Take the case of “L,” a female friend with a deep, booming voice. I have often found myself looking askance at her husband, “H.” Though “H” is basically pretty masculine, having neither a ponytail nor a tight feminine derriere like “K,” still I wonder: “H,” when you are having marital relations with “L,” and she calls out your name in that deep, booming, nearly male voice, and you continue having marital relations with her (i.e., you are not “turned off”), does this not imply that you, “H,” are, in fact, still “turned on?” And doesn’t this indicate that, on some level, you, “H,” have a slight latent desire to make love to a man? Or consider the case of “T,” a male friend with an extremely small penis. (We attend the same gym.) He is married to “O,” an average-looking woman who knows how to fix cars. I wonder about “O.” How does she know so much about cars? Is she not, by tolerating this non-car-fixing, short-penised friend of mine, indicating that, at some level, she wouldn’t mind being married to a woman, and is therefore, perhaps, a tiny bit functionally gay? And what about “T?” Doesn’t the fact that “T” can stand there in the shower room at our gym, confidently toweling off his tiny unit, while “O” is at home changing their spark plugs with alacrity, indicate that it is only a short stroll down a slippery slope before he is completely happy being the “girl” in their relationship, from which it is only a slight fey hop down the same slope before “T” is happily married to another man, perhaps my car mechanic, a handsome Portugese fellow I shall refer to as “J?” Because my feeling is, when God made man and woman He had something very specific in mind. It goes without saying that He did not want men marrying men, or women marrying women, but also what He did not want, in my view, was feminine men marrying masculine women. Which is why I developed my Manly Scale of Absolute Gender.

Using my Scale, which assigns numerical values according to a set of masculine and feminine characteristics, it is now easy to determine how Manly a man is and how Fem a woman is, and, therefore how close to a Samish-Sex Marriage a given marriage is. Here’s how it works: Say we determine that a man is an 8 on the Manly Scale, with 10 being the most Manly of all and 0 basically a Neuter. And say we determine that his fiancee is a -6 on the Manly Scale, with a -10 being the most Fem of all. Calculating the difference between the man’s rating and the woman’s rating – the Gender Differential – we see that this proposed unions is not, in fact, a Samish-Sex Marriage, which I have defined as “any marriage for which the Gender Differential is less than or equal to 10 points.” Friends whom I have identified as being in Samish-Sex Marriages often ask me, Ken, given that we have scored poorly, what exactly would you have us do about it? Well, one solution I have proposed is divorce – divorce followed by remarriage to a more suitable partner. “K,” for example, could marry a voluptuous high-voiced N.F.L. cheerleader, who would more than offset his tight feminine derriere, while his ex-wife, “S,” might choose to become involved with a lumberjack with very large arms, thereby neutralizing her thick calves and faint mustache. Another, and of course preferable, solution would be to repair the existing marriage, converting it from a Samish-Sex Marriage to a healthy Normal Marriage, by having the feminine man become more masculine, and/or the masculine woman become more feminine. Often, when I propose this, my friends become surly. How dare I, they ask. What business is it of mine? Do I think it is easy to change in such a profound way? To which I say, It is not easy to change, but it is possible.

I know, because I have done it.

When young, I had a tendency to speak too quickly, while gesturing too much with my hands. Also, my opinions were unfirm. I was constantly contradicting myself in that fast voice, while gesturing like a girl. Also, I cried often. Things seemed so sad. I had long blond hair, and liked it. My hair was layered and fell down across my shoulders, and, I admit it, I would sometimes slow down when passing a shop window, to look at it, to look at my hair! I had a strange constant feeling of being happy to be alive. This feeling of infinite future possibility sometimes caused me to laugh when alone, or even, on occasion, to literally skip down the street, before pausing in front of a shopwindow and giving my beautiful hair a cavalier toss. To tell the truth, I do not think I would have scored very high on my Manly Scale, if the Scale had been invented at that time, by me. I suspect I would have scored so Fem on the Test that I would have been prohibited from marrying my wife, “P,” the love of my life. And I think, somewhere in my heart, I knew that. I knew I was too Fem.

So what did I do about it? Did I complain? Did I whine? Did I expect activist judges to step in on my behalf, manipulating the system to accommodate my peculiarity?

What I did was, I changed. I undertook what I like to think of as a classic American project of self-improvement. I made videos of myself talking, and studied these, and in time succeeded in training myself to speak more slowly, while almost never moving my hands. Now, if you ever meet me, you will observe that I always speak in an extremely slow and manly and almost painfully deliberate way, with my hands either driven deep into my pockets or held stock-still at the end of my arms, which are bent slightly at the elbows, as if I were ready to respond to the slightest provocation by punching you in the face. As for my opinions, they are very firm. I rarely change them. When feeling like skipping, I absolutely do not skip. As for my long beautiful hair – well, I am lucky, in that I am rapidly going bald. Every month, when I recalculate my ranking on the Manly Scale, I find myself becoming more and more Manly, as my hair gets thinner and my girth increases, thickening my once lithe, almost girlish, physique, thus insuring the continuing morality and legality of my marriage to “P.”

My point is simply this: If I was able to effect these tremendous positive changes in my life, to avoid finding myself in the moral/legal quagmire of a Samish-Sex Marriage, why can’t “K,” “S,” “L,” “H,” “T,” and “O” do the same?

I implore any of my friends who find themselves in a Samish-Sex Marriage: Change. If you are a feminine man, I urge them, become more manly. If you are a masculine woman, become more feminine. If you are a woman and are thick-necked or lumbering, or have ever had the slightest feeling of attraction to a man who is somewhat pale and fey, deny these feelings and, in a spirit of self-correction, try to become more thin-necked and light-footed, while, if you find it helpful, watching videos of naked masculine men, to sort of re-train yourself in the proper mode of attraction. If you are a man, and, upon seeing a thick-waisted, athletic young woman walking with a quasi-mannish gait through your local grocery, you imagine yourself in a passionate embrace with her, in your car, a car that is parked just outside, and which is suddenly, in your imagination, full of the smell of her fresh young breath – well, stop thinking that! Are you a man or not?

I, for one, am sick and tired of this creeping national tendency to let certain types of people take advantage of our national good nature by marrying individuals who are essentially of their own gender. If this trend continues, before long our towns and cities will be full of people like “K,” “S,” “L,” “H,” “T,” and “O” “asserting their rights” by dating, falling in love with, marrying, and spending the rest of their lives with whomever they please.

I, for one, am not about to stand by and let that happen.

Because then what will we have? A nation ruled by the anarchy of unconstrained desire. A nation of willful human hearts, each lurching this way and that, reaching out for whatever it spontaneously desires, unconcerned about the external form in which that desired thing is embodied. That is not the kind of world in which I wish to live.

I, for one, intend to become ever more firmly male, enjoying my golden years, while watching “P” become ever more female, each of us vigilant for any hint of ambiguity in the other. And as our children, “G” and “M,” grow, should they begin to show the slightest hint of some lingering residue of the opposite gender, “P” and I will lovingly pull them aside and list all the particulars by which we were able to identify their unintentional deficiency. Then, together, we will devise a suitable correction.

And in this way, the race will go on.