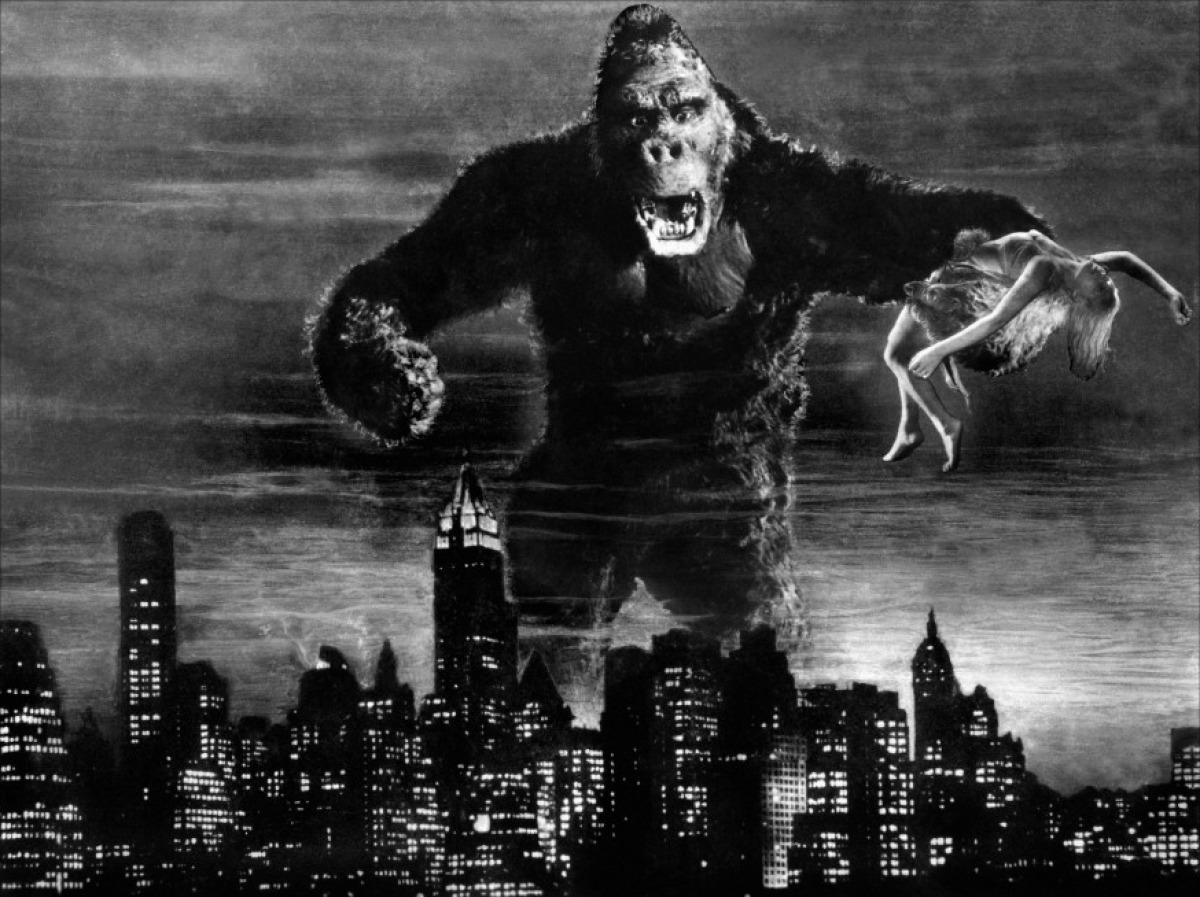 I was getting hot flashes of desperation and running about the flat picking things up and putting them down aimlessly. I wanted a rest, wanted peace, wanted the world to let me along for a bit. King Kong was playing at the Chelsea Odeon, so I went.

Wonderful inside the Odeon, cool and quiet and sheltered from the world. The place had been redone, the seating was spacious and comfortable. The lights had not yet dimmed, the screen was still playing music to itself the way they always do before a film starts. I like that music whatever it is, it sounds the same in all cinemas, light and gay and full of safe expectation.

The film was first released in the United States in 1933 during the Great Depression. That sounds strange: the Great Depression. One thinks of millions of people sitting with their heads in their hands and groaning all at the same time. Many did of course but there was no atom bomb then, the world was still like a child too little to know about death. Whatever was happening beyond the camera’s field of vision, innocence was still possible and one felt it in the opening of the picture: the dark and foggy harbour, the film entrepreneur with his ship bound for a secret destination, the beautiful hungry girl he recruits when he finds her stealing apples. He holds her at arm’s length looking intently at her face, she returns the look almost fainting, full of surrender that is transcendentally sexual and innocent. She knows she is beautiful, know that her beauty has been recognised, that good things will happen if she surrenders.

On the ship he rehearses her in front of the camera, has her look up (‘Higher, higher!’) and scream. He doesn’t tell her what she’ll be screaming at later but he knows he’s going to bring her to some giant terror. It’s a reversal of the Schöne Müllerin theme of the unattainable beauty: the voyeur, the picture-maker, ust put his attainable beauty within easy reach of the colossal beast. I watched her scream at the unknown horror she was heading for. That was a good touch, it was absolutely right. She screamed with complete acceptance of her place in life.

When Skull Island appeared it was mostly a painted backdrop but that didn’t matter; even if the studios and camera crew and all the behind-the-scenes equipment had been visible in the film it wouldn’t have mattered. Even showing the animator moving his little articulated models and photographing them frame by frame wouldn’t have made any difference in the effect: Kong with his teddy-bear fur is a fifty-foot tall idea even if the reality was only eighteen inches high. Kong lives. There was a giant arm for close-ups of Fay Wray screaming in Kong’s grasp and that seems right too. Possibly somewhere in Hollywood that giant arm lies in a warehouse, empty-handed now. Kong had no visible male member even when presumably excited but then he was all male member in a manner of speaking so that doesn’t matter either. On the other hand maybe that’s why he only wanted tiny women to play with instead of looking for a fifty-foot-tall she-ape with whom to have sexual kongress. The psychological ripples are ever-widening. Now that I think of it why weren’t there any other fifty-foot-high gorillas about? What had happened to Kong’s mother and father? That too must be part of the pathos of the thing: Kong is an orphan and along of his kind. Not just an orphan but a giant orphan, a monstrous Tom o’Bedlam.