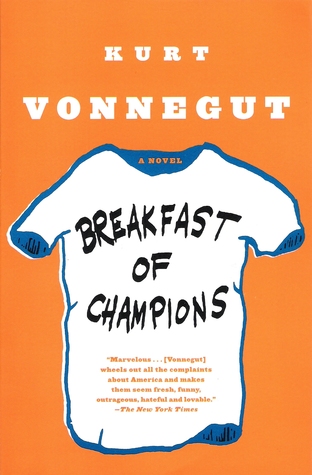 The words in the book, incidentally, were about life on a dying planet named Lingo-Three, whose inhabitants resembled American automobiles. They had wheels. They were powered by internal combustion engines. They ate fossil fuels. They weren’t manufactured, though. They reproduced. They laid eggs containing baby automobiles, and the babies matured in pools of oil drained from adult crankcases.

Lingo Three was visited by space travellers, who learned that the creatures were becoming extinct for this reason: they had destroyed their planet’s resources, including its atmosphere.

The space travellers weren’t able to offer much in the way of material assistance. The automobile creatures hoped to borrow some oxygen, and to have the visitors carry at least one of their eggs to another planet, where it might hatch, where the automobile civilization could begin again. But the smallest egg they had was a forty-eight pounder, and the space travellers themselves were only an inch high, and their space ship wasn’t even as big as an Earthling shoebox. They were from Zeltoldimar.

The spokesman for the Zeltoldimarians was Kago. Kago said that all he could do was to tell others in the Universe about how wonderful the automobile creatures had been. Here is what he said to all those rusting junkers who were out of gas: “You will be gone, but not forgotten.”

So Kago and his brave little Zeltoldimarian crew, which was all homosexual, roamed the Universe, keeping the memory of the automobile creatures alive. They came at last to the planet Earth. In all innocence, Kago told the Earthlings about the automobiles. Kago did not know that human beings could be as easily felled by a single idea as by cholera or the bubonic plague. There was no immunity to cuckoo ideas on Earth.

“The ideas Earthlings held didn’t matter for hundreds of thousands of years, since they couldn’t do much about them anyway. Ideas might as well be badges as anything.

“They even had a saying about the futility of ideas: ‘If wishes were horses, beggars would ride.’

“And then Earthlings discovered tools. Suddenly agreeing with friends could be a form of suicide or worse. But agreements went on, not for the sake of common sense or decency or self-preservation, but for friendliness.

“Earthlings went on being friendly, when they should have been thinking instead. And when they built computers to do some thinking for them, they designed them not so much for wisdom as for friendliness. So they were doomed. Homicidal beggars could ride.”

Within a century of little Kago’s arrival on Earth, according to Trout’s novel, every form of life on that once peaceful and moist and nourishing blue-green ball was dying or dead. Everywhere were the shells of the great beetles which men had made and worshipped. They were automobiles. They had killed everything.

Little Kago himself died long before the planet did. He was attempting to lecture on the evils of the automobile in a bar in Detroit. But he was so tiny that nobody paid any attention to him. He lay down to rest for a moment, and a drunk automobile worker mistook him for a kitchen match. He killed Kago by trying to strike him repeatedly on the underside of the bar.