Joan Of Arc and the brothers Kinsella 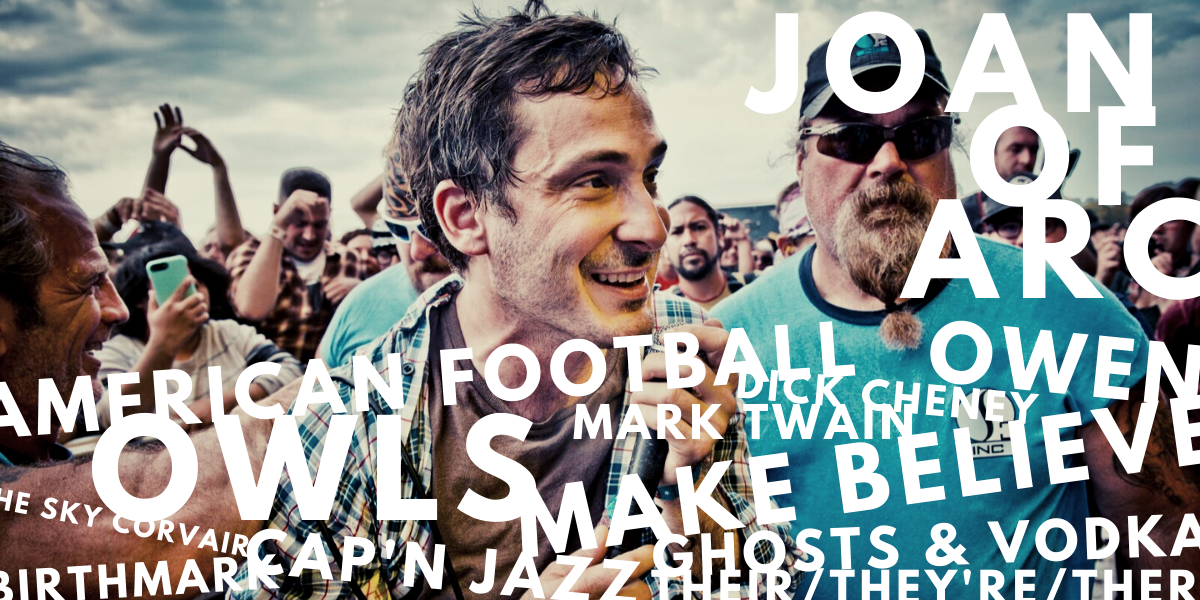 Some bands make music that gets stuck in your head. Others setup a studio in your parietal lobe and spend two decades recording music under a zillion different band names… admittedly there are fewer in the second camp.

Context factoidals: Joan Of Arc formed in 1995 and currently consists of Tim Kinsella, Bobby Burg, Melina Ausikaitis and Theo Katsaounis, with Tim as the only remaining founder member, and the line-up having been relatively consistent for about the past ten years. It wouldn’t really be possible to name a style of music they play beyond the all-encompassing ‘experimental’, although some outings have definitely influenced or even helped create other styles like math rock.

The reason this band is so great and so influential is the community of musicians who have played in the band, and the other bands that have sprung from Joan of Arc. The list is extraordinary, and actually the story really begins with teenage brothers Tim and Mike Kinsella forming Cap’n Jazz with Sam Zurick, Victor Villareal and Davey von Bohlen.

Cap’n Jazz existed from 1989 to 1995, breaking up shortly after releasing their only full-length, called Burritos, Inspiration Point, Fork Balloon Sports, Cards in the Spokes, Automatic Biographies, Kites, Kung Fu, Trophies, Banana Peels We’ve Slipped On and Egg Shells We’ve Tippy Toed Over, also known as Shmap’n Shmazz. They were and are a seminal emo band, but in the sense of proper ’emotional hardcore’ emo, like Fugazi and Rites of Spring, rather than the fluffier emo that was effectively an updating and poppifying of earlier goth stylings. The double compilation Analphabetanthology of Cap’n Jazz is a go to record for emo-loving folks.

Joan of Arc sprung from the debris of Cap’n Jazz, and the community of musicians who played in Joan of Arc often splintered off to form other side projects in the same way, with one Kinsella or another (oh yeah, I forgot to mention Nate Kinsella, the cousin and drummer for many of these bands!) To name a few of these associated or spin off projects, Make Believe, Their/They’re/There, Owls, Owen, The One Up Downstairs, American Football, Love of Everything, Birthmark, The Sky Corvair, Friend/Enemy, Ghosts & Vodka (no Kinsella but 2 JoA members), and of course Tim Kinsella and Victor Villareal record solo albums as well. Of course some spin offs are considerably more famous than their birth band, and there are many, many other spin-offs that contain no Kinsella.

As much as anything can be an introduction to 30 years of prolific music production from such a creatively diverse group as this, the first Spotify playlist in this article works hard to give you an overview of some of the moments of genius across all these projects. The second is more focused on Joan of Arc (and Owls as they’re practically interchangeable).

If pushed I’d say the most representative Joan of Arc album (which is also Tim’s favourite) is Joan of Arc, Dick Cheney, Mark Twain. But the best Joan of Arc album was probably made by Owls when they had the same line-up as the original Cap’n Jazz, and is eponymous.