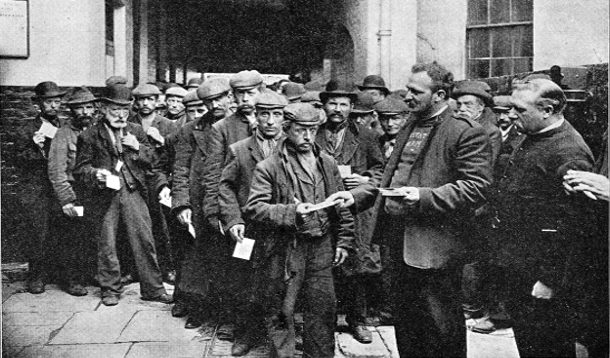 But, it will be instantly admitted, Civilisation has increased man’s producing power. Five men can produce bread for a thousand. One man can produce cotton cloth for 250 people, woollens for 300, and boots and shoes for 1000. Yet it has been shown throughout the pages of this book that English folk by the millions do not receive enough food, clothes, and boots. Then arises the third and inexorable question:
If Civilisation has increased the producing power of the average man, why has it not bettered the lot of the average man?

There can be one answer only – MISMANAGEMENT.

Civilisation has made possible all manner of creature comforts and heart’s delights. In these the average Englishman does not participate. If he shall be forever unable to participate, then Civilisation falls. There is no reason for the continued existence of an artifice so avowed a failure. But it is impossible that men should have reared this tremendous artifice in vain.

It stuns the intellect. To acknowledge so crushing a defeat is to give the death-blow to striving and progress.

One other alternative, and one other only, presents itself.
Civilisation must be compelled to better the lot of the average men.
This accepted, it becomes at once a question of business management. Things profitable must be continued; things unprofitable must be eliminated. Either the Empire is a profit to England, or it is a loss. If it is a loss, it must be done away with. If it is a profit, it must be managed so that the average man comes in for a share of the profit.