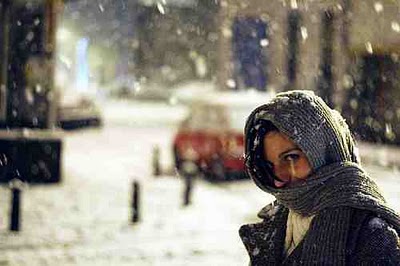 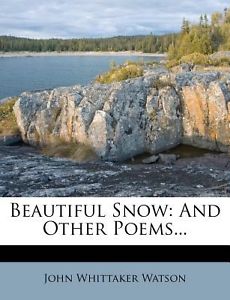 O the snow, the beautiful snow,
Filling the sky and the earth below!
Over the house-tops, over the street,
Over the heads of the people you meet,
Dancing, Flirting, Skimming along. Beautiful snow! it can do nothing wrong.
Flying to kiss a fair lady’s cheek;
Clinging to lips in a frolicsome freak;
Beautiful snow, from the heavens above,
Pure as an angel and fickle as love!

O the snow, the beautiful snow!
How the flakes gather and laugh as they go!
Whirling about in its maddening fun,
It plays in its glee with every one.
Chasing, Laughing, Hurrying by, It lights up the face and it sparkles the eye;
And even the dogs, with a bark and a bound,
Snap at the crystals that eddy around.
The town is alive, and its heart in a glow,
To welcome the coming of beautiful snow.

How the wild crowd go swaying along,
Hailing each other with humor and song!
How the gay sledges like meteors flash by,—
Bright for the moment, then lost to the eye!
Ringing, Swinging, Dashing they go Over the crest of the beautiful snow:
Snow so pure when it falls from the sky,
To be trampled in mud by the crowd rushing by;
To be trampled and tracked by the thousands of feet
Till it blends with the horrible filth in the street.

Once I was pure as the snows,—but I fell:
Fell, like the snow-flakes, from heaven—to hell:
Fell, to be tramped as the filth of the street:
Fell, to be scoffed, to be spit on, and beat.
Pleading, Cursing, Dreading to die, Selling my soul to whoever would buy,
Dealing in shame for a morsel of bread,
Hating the living and fearing the dead.
Merciful God! have I fallen so low?
And yet I was once like this beautiful snow!

Once I was fair as the beautiful snow,
With an eye like its crystals, a heart like its glow;
Once I was loved for my innocent grace,—
Flattered and sought for the charm of my face.
Father, Mother, Sisters all, God, and myself, I have lost by my fall.
The veriest wretch that goes shivering by
Will take a wide sweep, lest I wander too nigh;
For all that is on or about me, I know
There is nothing that’s pure but the beautiful snow.

How strange it should be that this beautiful snow
Should fall on a sinner with nowhere to go!
How strange it would be, when the night comes again,
If the snow and the ice struck my desperate brain!
Fainting, Freezing, Dying alone, Too wicked for prayer, too weak for my moan
To be heard in the crash of the crazy town,
Gone mad in its joy at the snow’s coming down;
To lie and to die in my terrible woe,
With a bed and a shroud of the beautiful snow!