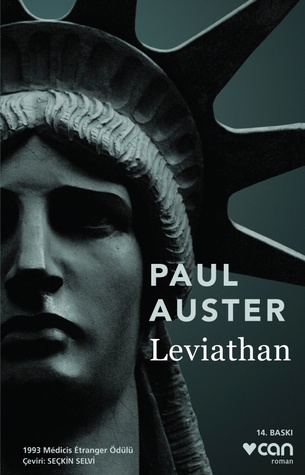 On January 16, 1988, a bomb went off in front of the courthouse in Turnbull, Ohio, blowing up a small, scale-model replica of the Statue of Liberty. Most people assumed it was a teenage prank, an act of petty vandalism without political motives, but because a national symbol had been destroyed, the incident was reported briefly by the wire services the next day. Six days after that, another Statue of Liberty was blown up in Danburg, Pennsylvania. The circumstances were almost identical: a small explosion in the middle of the night, no injuries, nothing damaged except the statue itself. Still, it was impossible to know if the same person was involved in both bombings or if the second blast was an imitation of the first—a so-called copy-cat crime. No one seemed to care much at that point, but one prominent conservative senator issued a statement condemning “these deplorable acts” and urged the culprits to stop their shenanigans at once. “It’s not funny,” he said. “Not only have you destroyed property, but you’ve desecrated a national icon. Americans love their statue, and they don’t take kindly to this brand of horseplay.”

All in all, there are some one hundred and thirty scale-model replicas of the Statue of Liberty standing in public places across America. They can be found in city parks, in front of town halls, on the tops of buildings. Unlike the flag, which tends to divide people as much as it brings them together, the statue is a symbol that causes no controversy. If many Americans are proud of their flag, there are many others who feel ashamed of it, and for every person who regards it as a holy object, there is another who would like to spit on it, or burn it, or drag it through the mud. The Statue of Liberty is immune from these conflicts. For the past hundred years, it has transcended politics and ideology, standing at the threshold of our country as an emblem of all that is good within us. It represents hope rather than reality, faith rather than facts, and one would be hard-pressed to find a single person willing to denounce the things it stands for: democracy, freedom, equality under the law. It is the best of what America has to offer the world, and however pained one might be by America’s failure to live up to those ideals, the ideals themselves are not in question. They have given comfort to millions. They have instilled the hope in all of us that we might one day live in a better world.

Eleven days after the Pennsylvania incident, another statue was destroyed on a village green in central Massachusetts. This time there was a message, a prepared statement phoned into the offices of the Springfield Republican the next morning. “Wake up, America,” the caller said. “It’s time to start practicing what you preach. If you don’t want any more statues blown up, prove to me that you’re not a hypocrite. Do something for your people besides building them bombs. Otherwise, my bombs will keep going off. Signed: The Phantom of Liberty.”

Over the next eighteen months, nine more statues were destroyed in various parts of the country. Everyone will remember this, and there’s no need for me to give an exhaustive account of the Phantom’s activities. In some towns, twenty-four-hour guards were posted around the statues, manned by volunteer groups from the American Legion, the Elks Club, the high school football team, and other local organizations. But not every community was so vigilant, and the Phantom continued to elude detection. Each time he struck, there would be a pause before the next explosion, a long enough period to make people wonder if that was the end of it. Then, out of the blue, he would turn up somewhere a thousand miles away, and another bomb would go off. Many people were outraged, of course, but there were others who found themselves in sympathy with the Phantom’s objectives. They were in the minority, but America is a large place, and their numbers were by no means small. To them, the Phantom eventually became a kind of underground folk hero. The messages had a lot to do with it, I think, the statements he phoned in to newspapers and radio stations the morning after each explosion. They were necessarily short, but they seemed to get better as time went on: more concise, more poetic, more original in the way they expressed his disappointment in the country. “Each person is alone,” one of them began, “and therefore we have nowhere to turn but to each other.” Or: “Democracy is not a given. It must be fought for every day, or else we run the risk of losing it. The only weapon at our disposal is the Law.” Or: “Neglect the children, and we destroy ourselves. We exist in the present only to the degree that we put our faith in the future.” Unlike the typical terrorist pronouncement, with its inflated rhetoric and belligerent demands, the Phantom’s statements did not ask for the impossible. He simply wanted America to look into itself and mend its ways. In that sense, there was something almost Biblical about his exhortations, and after a while he began to sound less like a political revolutionary than some anguished, soft-spoken prophet. At bottom, he was merely articulating what many people already felt, and in some circles at least, there were those who actually spoke out in support of what he was doing. His bombs hadn’t hurt anyone, they argued, and if these two-bit explosions forced people to rethink their positions about life, then maybe it wasn’t such a bad idea after all.