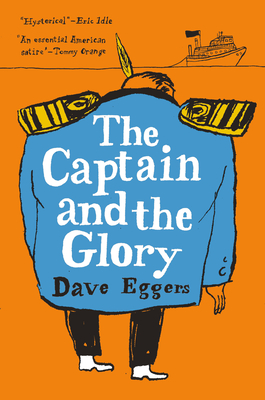 There were a number of possible replacements for the Admiral – a dozen or so crew members who had steered great ships before, who knew nautical navigation and maritime law. There were at least ten, in fact, who had worked on this particular ship for decades and knew its every last gauge and gudgeon. As the passengers were contemplating which of these qualified persons could take the helm, one of the passengers spoke up.

“I’ll do it,” he said loudly with a voice at once high-pitched and hoarse. This man was large and lumpy, and a bit hunched over, and wore a yellow feather in his hair. All the passengers knew him well. They knew him to be the guy who sold cheap souvenirs near the putt-putt golf course, who had borrowed money from all of the ship’s adults and some of its teenagers, who swindled rubes via three-card monte and pig-in-the-poke, who stayed inside on windy or rainy days (because the effect on his feather was catastrophic) and who said pretty much anything that popped into his head.

“I like that guy,” said one passenger. “He says anything that pops into his head.”

“Yeah!” yelled another. This man’s nickname was Fingers, because he regularly stole passengers’ wallets and purses, and specialized in stealing candy from children. Fingers was close friends with the man with the yellow feather, and the two of them were part of a coterie of petty thieves and confidence men who typically gathered under the stairs near the women’s locker room so they could take upskirt photos. Among them was Ed the Unwashed, who laundered money, and Sweetie, who resold the candy Fingers had stolen from children. There was a blackmailer named Benny the Squeeze, a murderer named Patsy the Murderer, and a patsy named Michael the Cohen. There was a knee-breaker named Freddie the Whack, and a nattily dressed racketeer named Paul the Manafort, and they both—they all—led the cheers for the man with the yellow feather. They and the rest of the Upskirt Boys – for that was what they called themselves – were greatly amused by the idea of their buddy, whom they all secretly considered almost unbearably vulgar and thin-skinned and having an oniony, old-man smell, becoming captain.

“Let me be captain!” the man with the yellow feather yelled. He had never been a captain before. He had never steered a ship of any kind of size, and had insulted the previous captains loudly and often. In fact, for years this man had been telling his fellow passengers how much he didn’t even like boats. He had said, over and over, that all ships were bad, and everyone running them was bad. In fact, he loathed everyone on the ship, unless they were willing to loan him money or were women-in-bathing-suits.

“Let me be captain!” he said again.