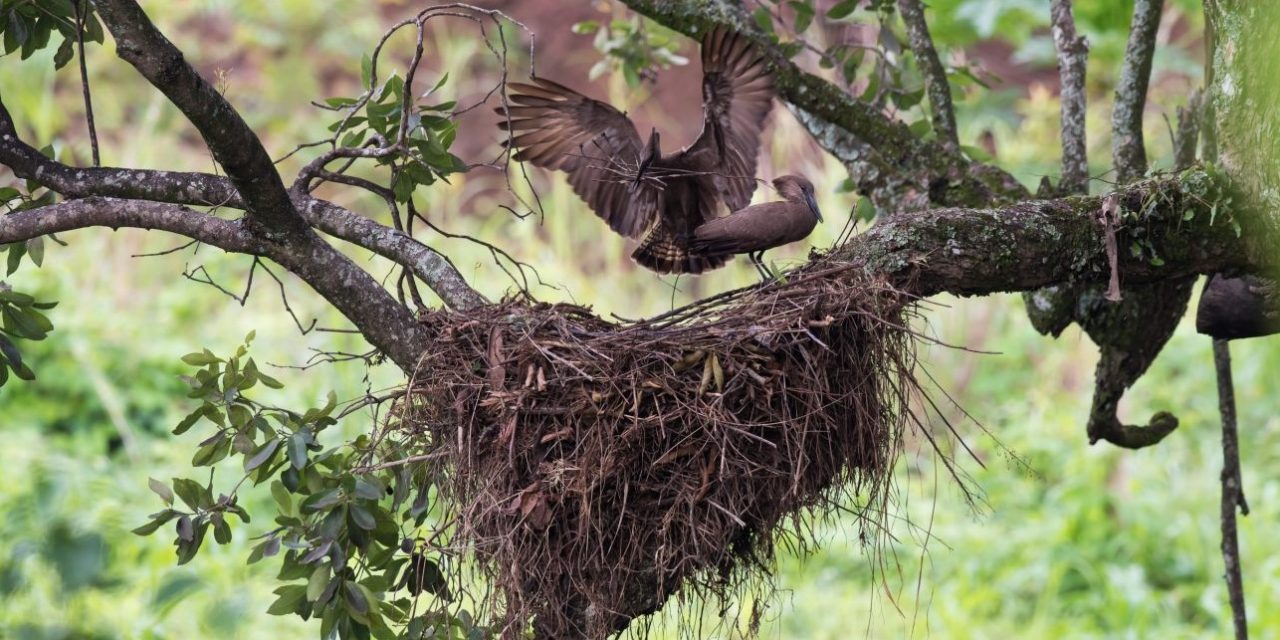 In a stretch of comparative quiet, by a shore of white sand, a bird I recognized at once was wading carefully in the shallows: rook-size, it was brown all over, but its head was remarkable: a big broad bill balanced by a triangle of crest projecting from the back gave it the shape of an anvil: a hammerkop. It walked slowly, concentrating on the water surface as it shuffled its feet, stirring up the sand to flush out small fish, molluscs and beetles, letting us come very close before it rose jerkily into the air on surprisingly broad wings, its head stretched out, and flew past us, light and silent as an owl. A bird with a genus all its own, its place in science almost as mysterious as its role in myth, at one time or another it was thought to be related to the herons or the flamingos or the shoebill; recent egg-white protein analysis puts it closest to the storks, but the parasites on its skin and in its feathers relate it to the plovers, snipes and sandpipers. And its behaviour is all its own.

We rounded a long bend, and it was at once easy to understand why the bird has a special place in an older African natural history. In the fork of a tree about thirty feet from the ground was an extraordinary structure: a huge rough ball of sticks and debris with a hole at the side beneath an overhang of roof: the hammerkop nest. Everywhere in Africa men leave the hammerkop alone; its very name is often taboo; it is a sorcerer among the birds. There can be no ordinary explanation for spending that amount of effort on such a nest when you’re no bigger than a Pied crow: the hammerkop compels all the other birds to come and build its nest for it, summoning the swallow from the air for the finishing touch, a plaster of mud round the entrance.

But then, according to the observations of Wilson and Wilson in Mali, both sexes build it with no help from anyone. Out all day fishing and hunting for frogs, they are such high achievers by dint of an exemplary Lary-like routine: they build from dawn until ten o’clock every morning and then put in more time when they come home in the evening, from four o’clock sharp until six. It takes a week to construct a mass of sticks, reeds, grass and mud with a central bowl in the fork – and at this stage the pair are sometimes driven away and the nest purloined by the Milky eagle-owl, which is enormous, a great peeler of hedgehogs, and also good at ripping up young monkeys, warthog piglets, polecats, herons, ducks and even other owls, including the Spotted eagle owl. But if all goes well the next stage takes a month or more: the sides are built up by weaving small sticks together and the roof gradually added using long ones (up to three-and-a-half feet long) which are pushed upright into the wickerwork edge, slanted towards the centre, and intertwined with others placed longitudinally. The pair work their way across the nest, one bird inside, one on top, and when the roof is complete (now so strong that a man can stand on it), it is heaped up with more reeds and grass and sticks; the last job is to plaster the entrance and the nest-chamber smooth with lots of mud. Now is the time for any passing Barn owl to move in; or a Monitor lizard to heave itself through the hallway; or a genet to curl up inside; or a large snake, particularly the Spitting cobra, to wind in and take a siesta. But if the hammerkops manage to keep their now highly desirable nest (so well insulated that it remains at an even temperature inside) they roost in it together, gaining the entrance by flying low and then swooping up to close their wings at the last moment, in a so-called upward dive.

But all that work is a terrible strain; and quite apart from the relief, as the nest is being built, of copulating eight or ten times a morning, the birds throw some spectacularly open-minded parties. Eight to ten hammerkops are invited, some unattached, some married, some divorced. They turn up near the nest on a sandbank or a slab of rock or a flat piece of grass at any time of day. Everyone pairs off and the male runs up to the female with his wings drooped but the feathers at the back of his head alternately standing on end and falling flat with excitement. The pairs then run in circles side by side and an orgy of (technically speaking) false mounting takes place. No actual rubbing together of his everting and her receiving opposable vent is allowed in public, but you can’t complain. The soliciting bird crouches down, the other mounts and balances on top with open wings, and then, shivering with the erotic charge of it all, the lower bird raises its tail, the upper bird curves its tail down – and they press their tails together. They even like a little soixante-neuf, turning round and facing in opposite directions; and the whole party is accompanied by loud duets or a whole chorus of the calls known as yip-purring. Males mount females, females mount males, males mount males, and only lesbians are disadvantaged.

So despite all that grinding routine and disappointment (they sometimes build three nests a season and not one succeeds), hammerkops keep up their hobbies and live to a great age: average breeding success (according to Urban, Fry and Keith, 1986) is probably as low as 0.13 young per adult per year which, as the population seems to be increasing, means that the average hammerkop must live for at least twenty years.

Just as I was thinking about all that sex, and wondering why, as far as I could remember, among birds only the ostrich, the rhea, the emu and the cassowary, the tinamous, ducks and screamers have a penis; and what it would be like to be a hammerkop taking an upward dive head-first towards the cool soft sheets of the nest-chamber straight into the coils of a Spitting cobra, Léonard swung the bow of the dugout left into a small tributary and I realized that we were about to arrive at Boha.