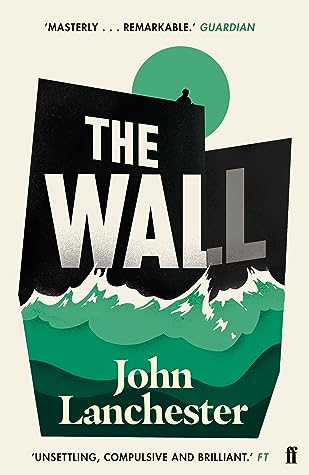 Mornings on the Wall, dawn and dusk and night, were times for poetry. Skyconcretewaterwind. Afternoons were for prose. Ten thousand kilometres of Wall. A Defender for every two hundred metres: fifty thousand Defenders on duty at any time. Another fifty thousand on the other shift, so a hundred thousand on duty, day in day out. Plus it’s two weeks on, two weeks off. Half of the Defenders aren’t on the Wall, they’re on leave or on training or waiting for their two weeks’ turn of duty. So two hundred thousand active Defenders at any given moment. Add support and ancillary staff, officers and administrators, add the Coast Guard and the air force and the navy, people off sick, whatever, and it’s more than three hundred thousand people involved in defending the Wall. That’s why everybody goes to the Wall, no exceptions. That’s the rule.

Except for Breeders. It’s a paradox. Because the Wall needs so many people, we need people to Breed, so that there are enough people to man the Wall. It’s on a fine edge as things currently stand, and there’s talk of the tours having to be made longer, two and a half or three years, to make up a shortfall. But people don’t want to Breed, because the world is such a horrible place. So as an incentive to get people to leave the Wall, if you reproduce, you can leave. You Breed to leave the Wall. Some people say that this isn’t fair to the children, who are born into a world where they have to do time on the Wall in their turn. Maybe they won’t, though. Maybe all the Others will have died off by then and we won’t need the Wall. Who knows? And besides, the children can always Breed in their turn, and get off the Wall that way. Prolonging the life of our species too, as a side effect. Breed to Leave, that’s the slogan.

I should say that people don’t despise or look down on Breeders. They just think they’re a bit weird. It’s not so much, that’s wrong, it’s more, why would you? Why don’t people want to Breed? It’s an idea that caught on after the Change: that we shouldn’t want to bring children into the world. We broke the world and have no right to keep populating it. We can’t feed and look after all the humans there already are, here and now; the humans who are here and now, most of them, are starving and drowning, dying and desperate; so how dare we make more of them? They aren’t starving and drowning here, in this country, but they are almost everywhere else; so how dare we make more humans to come into this world? There are lots of different answers to that. Nobody can predict the future; that’s one answer. God tells us to; that’s an answer which works for some. Maybe the best answer, though, or maybe I’m just talking about the one that makes the most sense to me, is just, because. Because; the best/worst answer to most human questions. Why are we here? Because.

Back to the prose. Most Defenders stand on the Wall because that’s where the manpower is needed, but the Wall isn’t the only form of border and coastal protection. The Flight scans the seas for Others, locates them, sometimes ‘takes them out’ then and there. It’s funny, only Defenders on the Wall talk about ‘killing’ Others: we’re the ones who do it face to face, and we’re the only ones who don’t use euphemisms for it. The Flight consists of some people in planes and many more people operating drones. Sometimes the Flight marks their location for the Guards, full name Coast Guards but everyone calls them Guards, who use ships of two main kinds, medium-range and short-range. They patrol the coast and the seas and their job is to sink the Others’ boats. The Defenders are there for the rest of the Others: the ones who get through, which is a significant number, because there is a lot of sky and sea to watch, and because ten thousand kilometres of coast is a lot of coast. They come in rowing boats and rubber dinghies, on inflatable tubes, in groups and in swarms and in couples, in threes, in singles; the smaller the number, often, the harder to detect. They are clever, they are desperate, they are ruthless, they are fighting for their lives, so all of those things had to be true for us as well. We had to be clever and desperate and ruthless and fight for our lives, only more so, or we would switch places. I didn’t want to die fighting on the Wall, but if it came to it, I would rather that than be put to sea. One in, one out: for every Other who got over the Wall, one Defender would be put to sea. A tribunal of our fellow Defenders would convene and decide who was most responsible, and those people, in that order of responsibility, would be put in a boat that same day. If five Others got over the Wall, five of us would be put to sea. It was easy to imagine being those people. Your old comrades pointing guns at you while you pushed your boat out into the water, the only feeling colder and lonelier and more final than being on the Wall.