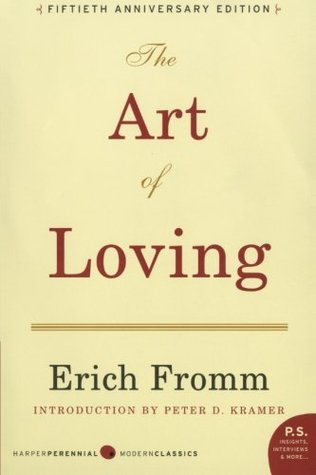 Is love an art? Then it requires knowledge and effort. Or is love a pleasant sensation, which to experience is a matter of chance, something one “falls into” if one is lucky? This little book is based on the former premise, while undoubtedly the majority of people today believe in the latter.

Not that people think that love is not important. They are starved for it; they watch endless numbers of films about happy and unhappy love stories, they listen to hundreds of trashy songs about love—yet hardly anyone thinks that there is anything that needs to be learned about love.

This peculiar attitude is based on several premises which either singly or combined tend to uphold it. Most people see the problem of love primarily as that of being loved, rather than that of loving, of one’s capacity to love. Hence the problem to them is how to be loved, how to be lovable. In pursuit of this aim they follow several paths. One, which is especially used by men, is to be successful, to be as powerful and rich as the social margin of one’s position permits. Another, used especially by women, is to make oneself attractive, by cultivating one’s body, dress, etc. Other ways of making oneself attractive, used both by men and women, are to develop pleasant manners, interesting conversation, to be helpful, modest, inoffensive. Many of the ways to make oneself lovable are the same as those used to make oneself successful, “to win friends and influence people.” As a matter of fact, what most people in our culture mean by being lovable is essentially a mixture between being popular and having sex appeal.

The active character of love becomes evident in the fact that it always implies certain basic elements, common to all forms of love. These are care, responsibility, respect, and knowledge…. Love is the active concern for the life and the growth of that which we love…. Respect is the ability to see a person as he is, to be aware of his unique individuality. Respect means the concern that the other person should grow and unfold as he is. Respect, thus, implies the absence of exploitation. I want the loved person to grow and unfold for his own, sake, and in his own ways, and not for the purpose of serving me. If I love the other person, I feel one with him or her, but with him as he is, not as I need him to be as an object for my use. It is clear that respect is possible only if I have achieved independence; if I can stand and walk without needing crutches, without having to dominate and exploit anyone else. Respect exists only on the basis of freedom: “l’amour est l’enfant de la liberté” as an old French song says; love is the child of freedom, never of domination…. To love somebody is not just a strong feeling—it is a decision, it is a judgment, it is a promise.