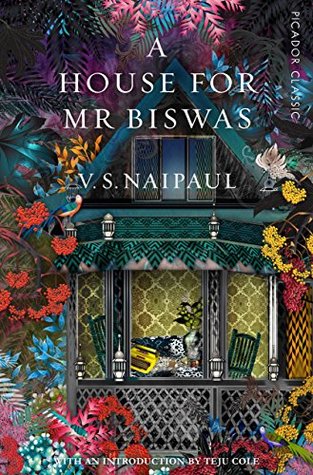 If, before Raghu left for the sugar-estate, Mr Biswas sneezed, Raghu remained at home, worked on his vegetable garden in the morning and spent the afternoon making walking-sticks and sabots, or carving designs on the hafts of cutlasses and the heads of walking-sticks. His favourite design was a pair of wellingtons; he had never owned wellingtons but had seen them on the overseer. Whatever he did, Raghu never left the house. Even so, minor mishaps often followed Mr Biswas’s sneeze: threepence lost in the shopping, the breaking of a bottle, the upsetting of a dish. Once Mr Biswas sneezed on three mornings in succession.

‘This boy will eat up his family in truth,’ Raghu said.

One morning, just after Raghu had crossed the gutter that ran between the road and his yard, he suddenly stopped. Mr Biswas had sneezed. Bipti ran out and said, ‘It doesn’t matter. He sneezed when you were already on the road.’

‘But I heard him. Distinctly.’

Bipti persuaded him to go to work. About an hour or two later, while she was cleaning the rice for the midday meal, she heard shouts from the road and went out to find Raghu lying in an ox-cart, his right leg swathed in bloody bandages. He was groaning, not from pain, but from anger. The man who had brought him refused to help him into the yard: Mr Biswas’s sneeze was too well known. Raghu had to limp in leaning on Bipti’s shoulder.

‘This boy will make us all paupers,’ Raghu said.

He spoke from a deep fear. Though he saved and made himself and his family go without many things, he never ceased to feel that destitution was very nearly upon him. The more he hoarded, the more he felt he had to waste and to lose, and the more careful he became.

Every Saturday he lined up with the other labourers outside the estate office to collect his pay. The overseer sat at a little table, on which his khaki cork hat rested, wasteful of space, but a symbol of wealth. On his left sat the Indian clerk, important, stern, precise, with small neat hands that wrote small neat figures in black ink and red ink in the tall ledger. As the clerk entered figures and called out names and amounts in his high, precise voice, the overseer selected coins from the columns of silver and the heaps of copper in front of him, and with greater deliberation extracted notes from the blue one-dollar stacks, the smaller red two-dollar stack and the very shallow green five-dollar stack. Few labourers earned five dollars a week; the notes were there to pay those who were collecting their wives’ or husbands’ wages as well as their own. Around the overseer’s cork hat, and seeming to guard it, there were stiff blue paper bags, neatly serrated at the top, printed with large figures, and standing upright from the weight of coin inside them. Clean round perforations gave glimpses of the coin and, Raghu had been told, allowed it to breathe.

These bags fascinated Raghu. He had managed to get a few and after many months and a little cheating–turning a shilling into twelve pennies, for example – he had filled them. Thereafter he had never been able to stop. No one, not even Bipti, knew where he hid these bags; but the word had got around that he buried his money and was possibly the richest man in the village. Such talk alarmed Raghu and, to counter it, he increased his austerities.