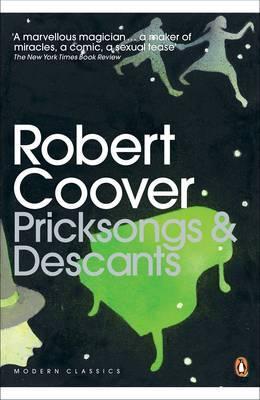 so bless me I’m ruminatin on the old times when virtue was its own so-called reward and acquired a well-bejeweled stud in the bargain propped up there in the stale limp sheets once the scene of so much blood and beauty like I say propped up and dyin away there in my old four-poster which on gamier days might seem a handsome well-lathed challenge to an old doxy but which this bad day threatens to throw up walls between the posts and box me in God help and I’m wonderin where’s my goodies? will I make it to the end? where’s the durned kid? and to while the awful time workin up a little tuneful reminiscence or two not so much of the old obscenities suffered but rather of the old wild dreams of what in some other kinda world I mighta had yes me with my wishful way of neckin ducks and kissin toads and lizards

oh I know why she’s late you warn her and it does no good I know who’s got her giddy car with his old death-cunt-and-prick songs haven’t I heard them all my God and smelt his hot breath in the singin? yes I know him can see him now lickin his hairy black chops and composin his polyphonies outa dread and appetite whisperin his eclogues sprung from disaster croonin his sacral entertainments yes I know him well and I tell her but Granny she says Granny you don’t understand the times are different there’s a whole new—

don’t understand! whose nose does she think she’s twistin the little cow? bit of new fuzz on her pubes and juice in the little bubbies and off she prances into that world of hers that ain’t got forests nor prodigies a dippy smile on her face and her skirts up around her ears well well I’ll give her a mystery today I will if I’m not too late already and so what if I am? shoot! let her go tippytoin through the flux and tedium and trip on her dropped drawers a few times and see if she don’t come runnin back to old Granny God preserve me whistlin a different tune! don’t understand! hah! for ain’t I the old Beauty who married the Beast?

knew all the old legends I did and gave my heart to them who wouldn’t that heard them? ain’t there somethin wrong with Beauty Papa? my sisters would ask ain’t she a little odd chasin about after toads and crows and stinky old creatures? but I had a dream and Papa maybe was uneasy about it but he was nothin if not orthodox and so had to respect it and even blessed my marriage when I found me a Beast

only my Beast never became a prince

but Granny it’s a new generation! hah! child I give you generations without number transient as clouds and fertile as field mice! don’t speak to me of the revelations of rebirthers and genitomancers! sing me no lumpen ballads of deodorized earths cleansed of the stink of enigma and revulsion] for I have mated with the monster my love and listened to him lap clean his lolly after

and the basket of goodies? is that you on the path my dear? hurry! for my need is great and my wisdom overflows and your own time is hard by

for listen I have suffered a lifetime of his doggy stink until I truly felt I couldn’t live without it and child his snore would wake the dead though now I cannot sleep for the silence yes and I have pawed in stewpots with him and have paused to watch him drop a public turd or two on sidewalks and seashores in populous parks and private parlors and granddaughter I have been split with the pain and terrible haste of his thick quick cock and then still itchin and bleedin have gazed on as he leapt other bitches at random and I have watched my own beauty decline my love and still no Prince no Prince and yet you doubt that I understand? and loved him my child loved the damned Beast after all

yes yes I hear you knockin come in! hurry! bring me goodies! for I have veils to lift and tales to tell…

Something had changed. She stood motionless at the cottage door. Suspended. She felt abandoned, orphaned. Yet discovered. The bees hummed relentlessly among the flowers alongside the path. The sun beat down on the white weatherboards with an incessant, almost urgent, calm. What was it—? Aha! To begin with: the door was open!

Yes, she had been coming here for years and years, forever it seemed, and many times each year, always for the same reason, if that’s what it was, a reason, and always—she hesitated: some dim memory—? no, no—always the door had been closed.

Well, and so what? She stepped back from the door, and a kind of relief swept over her, and a kind of anxiety. It was curious. That door. Yet, otherwise, things seemed about the same: the cottage itself, white in the sun; the garden, well cared for and in neat little rows, and over there the small shed where the garden tools were kept; the old well with the bucket drawn up under the small parasol-like roof, the bucket itself dry and cracked, surely useless, but much as it had always been; finally, down a short distance from the cottage, the woods, where even now could be heard the familiar chuck-chuck-chuck of the lumberman’s axe, measured, deliberate, solemn, muffled but clearly audible. It was simply that the door was open.

But wait! She frowned, clutched her basket to her side, glanced around. The sun, like just the sun: wasn’t it somehow hotter today, brighter, didn’t it seem stuck up there, brought to a strange deadly standstill? And the cottage, didn’t the cottage have a harder edge, the vines a subtler grip on the weatherboards, and wasn’t the air somehow full of spiders? She trembled. The old well seemed suddenly to hide some other well, the garden to speak of a stranger unimagined garden. And even the friendly rhythmic chucking of the lumberman’s axe: wasn’t it somehow too close by today, perversely insistent in its constancy?

Old stories welled in her like a summation of an old woman’s witless terrors, fierce sinuous images with flashing teeth and terrible eyes, phantoms springing from the sun’s night-tunnels to devour her childhood—in fright, she reached impulsively for the doorknob, glittering brassily in the sun’s glare. She hesitated. Beyond the door? The knob was warm in her grip, and she had a new awareness o£ breath and motion. She stared at the aperture and knew: not her. No. That much was obvious, an age had passed, that much the door ajar had told her.

She listened to the lumberman’s steady axe-stroke. The woods. Yes, an encounter, she smiled to recall it, to remember his deference, surprised by it then, but no longer. An encounter and an emergence. And so: she had known all along. And knowing she’d known somehow eased her anguish. She smiled faintly at the mockery of the basket she clutched. Well, it would be a big production, that was already apparent. An elaborate game, embellished with masks and poetry, a marshalling of legendary doves and herbs. And why not? She could well avail herself of his curiously obsequious appetite while it lasted. Even as the sun suddenly snapped its bonds and jerked westward, propelling her over the threshold, she realized that though this was a comedy from which, once entered, you never returned, it nevertheless possessed its own astonishments and conjurings, its towers and closets, and even more pathways, more gardens, and more doors.

Inside, she felt the immediate oppression of the scene behind drop off her shoulders like a red cloak. All that remained of it was the sullen beat of the lumberman’s axe, and she was able to still even that finally, by closing the door firmly behind her and putting the latch.