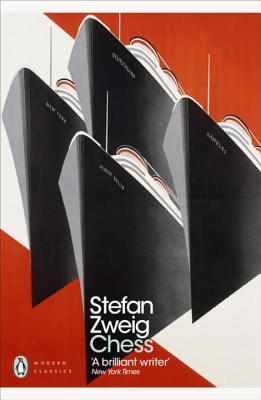 Within six months Mirko had mastered all the technical mysteries of chess, although with one curious reservation, which was frequently observed and mocked in chess-playing circles later. For Czentovic never managed to play a single game of chess from memory – or blindfold, as they say in the profession. He entirely lacked the ability to draw up his battlefield in the boundless space of the imagination, and always needed to have the black and white board with its sixty-four squares and thirty-two chessmen tangibly present. Even at the height of his international fame he always travelled with a folding pocket chess set, so that if he wanted to reconstruct a championship game or solve some problem, he had the position visible before him. This defect, trifling in itself, showed a lack of imaginative power, and was discussed in the inner circles of chess as heatedly as if, in a musical context, an outstanding virtuoso or conductor had proved unable to play or conduct without a score open in front of him. However, this curious quality did not delay Mirko’s stupendous rise in the least. At seventeen, he had already won a dozen chess prizes; at eighteen he was champion of Hungary, and at the age of twenty he finally captured the world championship. The most audacious of champions, every one of them immeasurably superior to him in intellectual talents, imagination and daring, fell victim to his cold, tenacious logic, just as Napoleon was defeated by the ponderous Kutuzov, or Hannibal by Fabius Cunctator, of whom Livy says that he too showed striking signs of apathy and imbecility in his childhood. So it was that the illustrious gallery of chess grandmasters, who unite in their ranks all kinds of intellectual superiority, who are philosophers, mathematicians, whose natures are calculating, imaginative and often creative, found their company invaded for the first time by a complete stranger to the world of the mind, a stolid, taciturn, rustic youth from whom even the wiliest of journalists never succeeded in coaxing a single word that was the least use for publicity purposes. It was true that what Czentovic withheld from the press in the way of polished remarks was soon amply compensated for by anecdotes about his person. For the moment he rose from the chessboard, where he was an incomparable master, Czentovic became a hopelessly grotesque and almost comic figure; despite his formal black suit, his ostentatious tie with its rather flashy pearl tiepin, and his carefully manicured fingers, in conduct and manners he was still the dull-witted country boy who used to sweep the priest’s living-room in the village. To the amusement and annoyance of his chess-playing colleagues, he clumsily and with positively shameless impudence sought to make as much money as he could from his gift and his fame, displaying a petty and often even vulgar greed. He travelled from town to town, always staying in the cheapest hotels, he would play in the most pitiful of clubs if he was paid his fee, he let himself be depicted in soap advertisements, and ignoring the mockery of his rivals, who knew perfectly well that he was unable to write three sentences properly, he even gave his name to a ‘philosophy of chess’ that was really written for its publisher, a canny businessman, by an obscure student from Galicia. Like all such dogged characters, he had no sense of the ridiculous; since winning the world tournament he regarded himself as the most important man in the world, while the knowledge that he had defeated all these clever, intellectual men, dazzling speakers and writers in their own field, and above all the tangible fact that he earned more than they did, turned his original insecurity into a cold and usually ostentatious pride.

‘But how could so rapid a rise to fame fail to turn such an empty head?’ concluded my friend, who had just been telling me some of the classic instances of Czentovic’s childish impudence. ‘How could a country boy of twenty-one from the Banat not be infected by vanity when all of a sudden, just for pushing chessmen about a wooden board for a little while, he earns more in a week than his entire village at home earns chopping wood and slaving away for a whole year? And isn’t it appallingly easy to think yourself a great man when you’re not burdened by the faintest notion that men like Rembrandt, Beethoven, Dante or Napoleon ever lived? With his limited understanding, the fellow knows just one thing: he hasn’t lost a single game of chess for months. So, as he has no idea that there are values in this world other than chess and money, he has every reason to feel pleased with himself.’

These comments of my friend’s did not fail to arouse my lively curiosity. I have always been interested in any kind of monomaniac obsessed by a single idea, for the more a man restricts himself the closer he is, conversely, to infinity; characters like this, apparently remote from reality, are like termites using their own material to build a remarkable and unique small-scale version of the world. So I did not conceal my intention of taking a closer look at this strange specimen of an intellectually one-track mind during the twelve-day voyage to Rio.

However – ‘You won’t have much luck there,’ my friend warned me. ‘As far as I know, no one has ever yet managed to extract the faintest amount of psychological material from Czentovic. For all his severe limitations, he’s a wily peasant and shrewd enough not to present himself as a target, by the simple means of avoiding all conversation except with fellow countrymen of his own background, whom he seeks out in small inns. When he feels he’s in the presence of an educated person he goes into his shell, so no one can boast of ever hearing him say something stupid, or of having assessed the apparently unplumbed depths of his ignorance.’