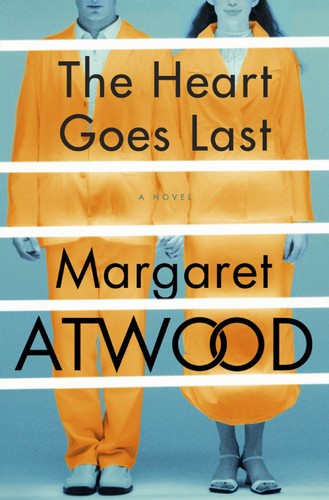 Black flatters me, thinks Charmaine, checking herself in the powder room mirror. Aurora had known where to take her shopping, and though black has never been her colour, Charmaine’s not negative about the results. The black suit, the black hat, the blond hair – it’s like a white chocolate truffle with dark chocolate truffles all around it; or like, who was that? Marilyn Monroe in Niagara, in the scene right before she gets strangled, with the white scarf she should never have worn, because women in danger of being strangled should avoid any fashion accessories that tie around the neck. They’ve shown that movie a bunch of times on Positron TV and Charmaine watched it every time. Sex in the movies used to be so much more sexy than it became after you could actually have sex in the movies. It was languorous and melting, with sighing and surrender and half-closed eyes. Not just a lot of bouncy athletics.
Of course, she thinks, Marilyn’s mouth was fuller than her own, and you could use very thick red lipstick then. Does she herself have that innocence, that surprised look? Oh! Goodness me! Big doll eyes. Not that Marilyn’s innocence was much in evidence in Niagara. But it was, later.
She widens her eyes in the mirror, makes an O with her mouth. Her own eyes are still a little puffy despite the cold teabags, with faint dark semicircles under them. Alluring, or not? That would depend on a man’s taste: whether he’s aroused by fragility with a hint of smouldering underneath, or perhaps by a hint of a punch in the eye. Stan wouldn’t have liked the puffy-eyed look. Stan would have said, What’s wrong with you? Fall out of bed? Or else, Aw, honey, what you need is a big hug. Depending on which phase of Stan she’s remembering. Oh, Stan…
Stop that, she tells herself. Stan’s gone.
Am I shallow? she asks the mirror. Yes, I am shallow. The sun shines on the ripples where it’s shallow. Deep is too dark.
She considers the black hat, a small round hat with a little brim – sort of like a schoolgirl hat – that Aurora said was just right for a funeral. But does she have to wear a hat? Everyone did, once; then hats disappeared. But now, inside Consilience, they’re appearing again. Everything in this town is retro, which accounts for the large supply of black vintage items in Accessories. The past is so much safer, because whatever’s in it has already happened. It can’t be changed; so, in a way, there’s nothing to dread.