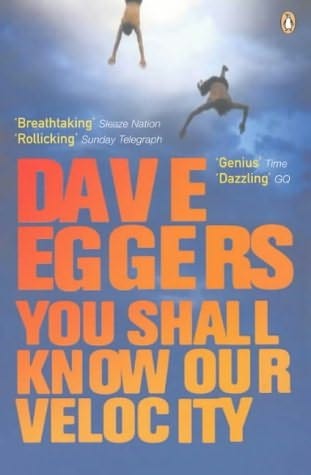 And my mind leaped ahead, skipping and whistling. In the first year I’d master French, the second year join some kind of traveling medical entourage, dressing wounds and disseminating medicine. We’d do inoculations. We’d do birth control. We’d hold the line on AIDS. After that I’d marry a Senegalese woman and we’d raise our kids while working shoulder to shoulder — all of us — at the clinic. The kids would check people in, maybe do some minimal filing — they’d do their homework in the waiting room. I’d visit America now and then, once every few years, in Senegal read the English-speaking papers once a month or so, slow my rhythm to one more in agreement with the landscape here, so slow and even, the water always nearby. We’d live on the coast.
“Sounds good,” said Hand.
“But that’s one lifetime.”
“Yeah.”
“But while I’m doing that one I’d want to be able to have done other stuff. Whole other lives — the one where I sail —”
“I know, on a boat you made yourself.”
“Yeah, for a couple years, through the Mediterranean, the Red Sea, the Caspian Sea.”
“Do only seas. No oceans.”
“Yeah but —”
“Can you sail? You can’t sail. Your brother sails, right?”
“Yeah, Tommy sails. But that’s the problem. It could take years to get good enough. And while doing that, I’m not out here with my Senegalese wife. And I’m definitely not running whitewater tours in Alaska.”
“So choose one.”
“That’s the problem, dumbshit.”
We passed two more white people on ATVs.
“You know quantum theory, right?”
This is how he started; it was always friendly enough but —
“Sure,” I lied.
“Well there’s this guy named Deutsch who’s taken quantum theory and applied it to everything. To all life. You know quantum theory, right? Max Planck?”
“Go on,” I said. He was such a prick.
“Anyway,” he continued. “Quantum physics is saying that atoms aren’t so hard-and-fast, just sitting there like fake fruit or something, touchable and solid. They’re mercurial, on a subatomic level. They come and go. They appear and disappear. They occupy different places at once. They can be teleported. Scientists have actually done this.”
“They’ve teleported atoms.”
“Yeah. Of course.”
No one tells me anything.
“I can’t believe I missed that,” I said.
“They also slowed the speed of light.”
“I did hear that.”
“Slowed it to a Sunday crawl.”
“That’s what I heard.”

We drove as the sky went pink then barn red, passing small villages emptying in the night, people standing around small fires.

Hand went on, gesturing, driving with his knees: “So if these atoms can exist in different places at once — and I don’t think any physicists argue about that — this guy Deutsch argues that everything exists in a bunch of places at once. We’re all made of the same electrons and protons, right, so if they exist in many places at once, and can be teleported, then there’s gotta be multiple us’s, and multiple worlds, simultaneously.”
“Jesus.”
“That’s the multiverse.”
“Oh. That’s a nice name for it.”
(…)

“So about the multiverse,” I said.
“Oh.”
“It’s irrelevant. Who cares how many universes or planets there are when they don’t intersect?”
“Who said they don’t intersect?” he asked.
“Do they?”
“I don’t know. I haven’t read anything about that. But the thing you’d like is that with the multiverse, you have basically every option you want — really, every option you’ll ever see or imagine — and one of your selves somewhere has taken that option. Pretty much every life you lead would conceivably be lived by one of your shadow selves. Maybe even after you die.”
“But it’s useless,” I said, “if you don’t share any consciousness.”
“Sure, I know. But then again, maybe we’re not dying. If you combine the quantum physics paradigm with the idea of the subjectivity of time, we’re basically all alive in a thousand places at once, for a neverending present.”

It did sound appealing. Consciousness or not, to be alive, always, somewhere. And what about dreams? That’s got to figure in — but what I wanted, really, was every option, simultaneously. Not in some parallel and irrelevant universe, but here. I wanted to stop and work at the field hospital and fall in love with the local beauty, but also be home in a week so I could do so many other things, fifty life-directions all seemed equally appealing and possible — shark wrangler! Whatever happened to training to be a goddamned shark wrangler?