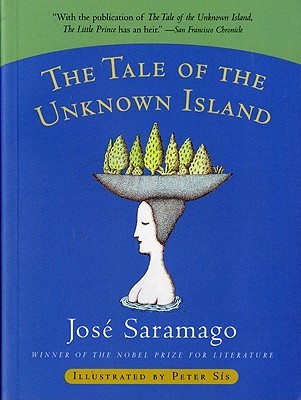 And the sailors, she asked, No one came, as you can see, But did some at least say they would come, she asked, They said there are no more unknown islands and that, even if there were, they weren’t prepared to leave the comfort of their homes and the good life on board passenger ships just to get involved in some ocean-going adventure, looking for the impossible, as if we were still living in the days when the sea was dark, And what did you say to them, That the sea is always dark, And you didn’t tell them about the unknown island, How could I tell them about the unknown island, if I don’t even know where it is, But you’re sure it exists, As sure as I am that the sea is dark, Right now, seen from up here with the water the colour of jade and the sky ablaze, it doesn’t seem at all dark to me, That’s just an illusion, sometimes islands seem to float above the surface of water, but it’s not true, How do you think you’ll manage if you haven’t got a crew, I don’t know yet, We could live here and I could get work cleaning the boats that come into port, and you, And I, You must have some skill, a craft, a profession, as they call it nowadays, I have, did have, will have if necessary, but I want to find the unknown island, I want to find out who I am when I’m there on that island, Don’t you know, If you don’t step outside yourself, you’ll never discover who you are, The king’s philosopher, when he had nothing to do, would come and sit beside me and would watch me darning the pages’ socks, and sometimes he would start philosophizing, he would say that each man is an island, but since that has nothing to do with me, being a woman, I paid no attention to him, what do you think, That you have to leave the island in order to see the island, that we cant see ourselves unless we become free ourselves, Unless we escape from ourselves, you mean, No, that’s not the same thing. The blaze in the sky was dying down, the waters grew suddenly purple, not even the cleaning woman could doubt that the sea really is dark, at least at certain times of the day.

Letter from an Unknown Woman