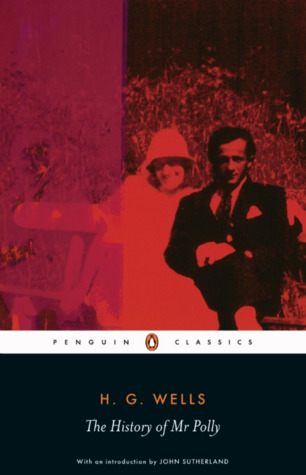 The essential thing of those fifteen long years of shopkeeping is Mr Polly, well athwart the counter of his rather ill-lit shop, lost in a book, or rousing himself with a sigh to attend to business.

And meanwhile he got little exercise; indigestion grew with him until it ruled all his moods; he fattened and deteriorated physically, great moods of distress invaded and darkened his skies, little things irritated him more and more, and casual laughter ceased in him. His hair began to come off until he had a large bald space at the back of his head. Suddenly, one day it came to him – forgetful of those books and all he had lived and seen through them  – that he had been in his shop for exactly fifteen years, that he would soon be forty, and that his life during that time had not been worth living, that it had been in apathetic and feebly hostile and critical company, ugly in detail and mean in scope, and that it had brought him at last to an outlook utterly hopeless and grey.